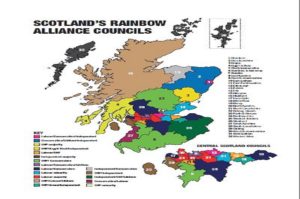 I have been musing upon the new leaders we are seeing in this dis-United Kingdom of ours and know we have no Young Pretenders amongst them, thank whatever Lord you follow…
Let me explain.

But it was a country wide verdict on the government in power and despite local politicians making it as much about their local area as possible, it was always overshadowed by national priorities.

Overall, it was a bad day for the British Government. The ruling Conservative Party lost heavily.

More significantly, than the results in England and Wales, in Scotland and Northern Ireland there was clear evidence that the United Kingdom may not be with us much longer. Scotland once again voted overwhelmingly for the Scottish National Party who have been the party in power for around 15 years and who believe in Scottish Independence. Their partners, the Greens picked up more votes and councilors making the vote for independence even stronger.

In Northern Ireland, for the very first time, Sinn Fein, formerly the political wing of the Irish Republican Army (IRA) won the majority of seats and the highest percentage of the votes cast. They are firm believers in a United Ireland and taking the six counties in the north out of the Kingdom in which they should have never belonged, according to their philosophy and reading of history.

It serves as a sermon for two things.

Firstly, both are social democratic parties and though they follow a “nationalist” desire to have countries redefined, they are not the rabid right wing nationalist parties of the ultra-right. They do not scare the children.

Secondly, emerging from both are new leaders who share the vision of the originators of their party and after they established their parties as credible political forces, have now made them more mainstream, electable and government material. What we are seeing in both, is the vibrant, next generation who can take the original vision and reinvigorate it.

They have taken it to another level.

Both are women. One was a teenage mother, and the other has spoken of her and her husbands’ pain at being unable to conceive. They have remarkably normal outlooks, with a tremendous vision and ability to talk to their constituents about real things that affect real people.

And then I gaze westwards.

From over here, it looks like America has their two political parties with emerging and diametrically opposite issues. One side has a lack of an emerging new leader whilst the other appears to be struggling to keep all the Young Pretenders in their place.

The former is the Democrats.

Whatever happened to Kamala Harris? We liked her. We thought that she would emerge slowly as the assured candidate that would lead the party as the bright new, ethnic voice of women and the sensitive and sensible. It would appear not to be going well.

Then there is the Republican Party.

Notoriety brings its own publicity of course. Somebody able to pick up the mantle of Donald J. Trump is being sought because his legacy is quite simple. Whether you like it or you do not, he was the man who spoke for massive numbers of voters who had given up politics because politicians did not speak for them.

We can think of many reasons why they should remain silent, but they possess a precious thing – a vote.

Of the five picks for the Republican candidate to represent the GOP in Ohio, four were Trump supporters. They saw it as an asset because that is what it was.

I was reminded of a dear friend who has just beat cancer. We watched his treatment with sadness and hope. And then he became clear and like all survivors in the hospital, got to ring the bell loudly to say another one has won the battle. His continued survival against the cancer is not assured… unless…

Once you have rung the bell and got rid of your cancer you need to feed your body properly to keep it cancer free. It is the same with the body politic. Until such times as the influence of Donald J. Trump has been sent back to being a minority whispered view, there shall be little progress in unity between the two sides of political conflict in the US. For that to happen, it needs a strong new leader to take the resetting of the agenda of Biden and develop it forward.

Just now that is a job lying vacant. It needs filled soon because the candidates to fill it are thin on the ground and the terror associated with the opposite side making its play is real. There was once an advert in the UK that said, the future is bright, the future is Orange. May whatever God you follow put his shoulder to the wheel to ensure that it is not…

Young Pretender – Prince Charles, famously referred to as ‘Bonnie Prince Charlie’ due to his boyish looks and alleged charm, was also known as ‘The Young Pretender’ during the final rebellion of 1745. Ultimately his campaign failed as he was not a great leader. Though Bonnie, he was nae Prince but a proper Charlie…