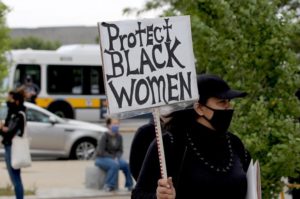 We’ve just witnessed history as the first Black woman was confirmed to the Supreme Court this month. Along with this nomination, we watched the attempts to humiliate, disrespect, and undermine her. In this time, where we know marginalized people are under attack, it’s necessary to understand that this type of attack is connected to the systems that are attacking Black women all across the world. When you are a Black person, society and the oppression built into various systems make you feel like no one cares about what you accomplished and that you need to always stay on your toes. This calls for reflection about the way others can stand along the frontlines against discrimination and injustice for Black women. It is a call for advocating on their behalf in your everyday life. African and African Diaspora movements have been central and key to our political struggles for years, but what about our allies? If we celebrate or take steps forward, there is often something in the back of our heads telling us that it could be taken away.

Sometimes Black women get the treatment from others that says we don’t deserve the fruit we bear because we are not worthy of hitting that “glass ceiling” (or whatever milestone was reached). To widen the focus to more than U.S. experiences, Jaimee Swift of Black Women Radicals has decided to co-chair the second annual Defend Black Women March in Washington D.C. from July 29-31, 2022. The goal of this march is to disrupt the ways Black history has been erased and celebrate the power of Black feminists in Latin America and the Caribbean. It is a global call to action. It’s an opportunity to learn what it means to protect Black women everywhere. D.C. has a historic and ever-growing migrant community of Caribbean and Latin-American residents at present. This growth can help us lean into being in community together. What are the ways you can take action? The first is through education and awareness. Without this, it can be difficult to make the connections or even acknowledge the kinds of harsh and vulnerable conditions some Black women face.

We’ve all been hearing “Black Lives Matter” for the last few years. Some will quickly say they’re in solidarity with Black people and all people of color, but what does that actually mean? What is the responsibility of solidarity? What happens when you’re aware of efforts to erase, harm, and violate marginalized people, but standby watching it? Black women all across the world, not just here in the U.S., have worked to defy the odds and conditions against them. This defiance and resistance have been crucial and essential to liberation everywhere, even if it cost some Black women their lives while fighting for it. Something like the efforts to get others out to vote despite challenges ends up benefiting everyone not only Black people. So, I ask all of you in solidarity with oppressed people to get serious about how you can be in support of Black women.

Don’t just retweet and express your outrage about the injustices you observed during Supreme Court Justice Ketanji Brown Jackson’s hearings. There is more to do then express sorrow or anger when witnessing or learning these kinds of experiences. Education is the first step to creating change before you can act. Defending and supporting Black women is not just a slogan for t-shirts and stickers, it’s a political priority. It starts with acknowledging all women of color then looking at the specific struggles of Black women in society and in the workplace, then using your privilege to bridge racial and gender gaps on their behalf. Black women are reportedly feeling the pressure in the offices as the only Black woman in the room: according to an annual Women in the Workplace study done by McKinsey & Company, 54 percent of Black women reported to be the only or one of the only Black people in their workplace. This solitude contributes to several difficult experiences for Black women, including feeling unprotected, unnoticed professionally, mismanagement along their career path, day-to-day discrimination, and a lack of career advancement.

Seek to understand the needs of Black women and be our first line of defense. Allies can help fight for our protection publicly. It may be in the workplace, in the community, or by actively protesting. Stepping in to be an advocate for Black women can give us the space and permission to mentally and emotionally rest and prepare for other challenges. I know many times the hardest part for me is when I want to express frustration or disappointment. Every negative emotion we as Black women may have been stereotyped as an attitude of aggression. Even if we are introverted or shy, it is often misunderstood as us being mean, stand-offish, or unapproachable.

To be an ally and advocate for Black women is to be prepared to call out any injustice in your own circle of family, friends, and co-workers too. Acknowledge and protect Black women by being a vocal ally in your own circles as you see and experience unfairness towards them. There is no right solution to make Black women feel like they don’t have to wear the weight of the world on their shoulders. Make the effort and it will become a learned habit. For a long time, America has made people create their own idea of what a Black woman was before getting to know any Black women personally. It will take years to change the narrative of what a Black woman is or is not. As it is changing, think of ways to help Black women heal, feel, celebrate, accomplish their goals, and realize their dreams.