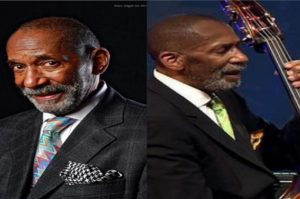 Ron Carter is a legend in the Jazz World. He appeared on 2,221 recording sessions, making him the most recorded musician ever. He is 85 and just announced an European Tour. Make sure to check him out!

KB: Did you always want to be a musician?

My house was always full of music, and I had an excellent public school music program, so it always seemed natural to me.

KB: I read that your first instrument was the cello? How old were you and why this instrument? And you switch to bass after that?

I was about 10. A teacher came in one day with a whole bunch of different instruments and told us to pick one. For some reason the cello (aluminum) seemed interesting to me. I switched to bass because in high school I realized that the African American kids were not being asked to play at outside events (PTA dinners, etc.). There were lots of cello players, but only one bass player and he was graduating that year. I switched to bass because then they would have to call me, and that led to my getting on the local music scene and the rest is history.

KB: You appeared on 2,221 recording sessions making you the most-recorded jazz bassist in history and you have a Guinness world record: How does that make you feel, and which recordings are the fondest memories to you?

I am proud of that accomplishment, and there are so many, I couldn’t possibly pick any single one(s) out as being “the ones I liked best”

KB: You were a member of the second Miles Davis Quintet: How was it working with Miles?

It was a great experiment every night. We never rehearsed, we just got on the stage each night and played. I like to liken it to Miles being the head chemist, and Herbie, Tony, Wayne, and I were the chemicals. Each night we mixed the chemicals something different and wonderful happened.

KB: You appeared on A Tribe Called Quest’s album The Low-End Theory: That is something totally different! Do you like Hip Hop?

I liked that I could put my stamp on this genre.

KB: You worked with so many great people: Anyone you have not worked with yet, but you would love to?

Yes! But too many to mention right now.

KB: You taught music at several colleges and schools: City College New York, the Berklee College of Music, and the Juilliard School in New York. Are you still teaching here?

I just retired from teaching at Manhattan School of Music. I have always thought of myself as a full-time teacher with a weekend gig.

KB: You won 3 Grammy Awards in your career: Why are you not more famous? The whole world should recognize your name like they do with Bruce Springsteen or Frank Sinatra!

You’re making me blush… I’d like to think I’m at least a little famous! But the artists you mention signed with multi-national labels who took over their careers and promoting them for maximum exposure and sales. I always wanted to do my own thing in my own way. So, I was never signed to a label in that way. I’m also a rather private person and do not yearn for notoriety every time I leave the house!

KB: If you could make another album with 7 of your most favourite songs (No songs you played on): Which songs would you pick and why?

I really can never pick a limited number of songs and say I choose these as best. That goes for my own songs and for someone else’s. Each one has its own unique characteristics, and I could never honestly say, “these seven are the best of what other composers wrote.” If I made an album like that, many factors would go into the decision of what went on the record. It’s impossible to hypothetically predict what they might be, but I know they would not be the only ones!