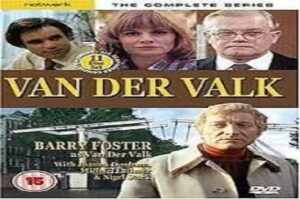 I many ways I cannot explain Van Der Valk.

It spanned 20 years and starred Barry Foster as a Dutch detective, detecting crime in Holland. Why someone in British television though we would like to see how the other half did it in Europe was a mixture of an absolute genius and/or a totally maverick idea. But it did work!

But, for me, the classic had enough of the exotic to make it a compelling watch. I loved it as a child and when I came back to the TV as an adult had the comfort of still being around for me to watch. It had a gentility to it which I adored, but some grittiness which, as an adult, I wanted to see.

When I went back and realized that the original rather than having hundreds of episodes and limitless series, there were only 5 series, and 32 episodes was a bit of a shock. But then again, it felt so familiar that it clearly could not be lost in the miasma of many hours of watching. Once again, it defied my understanding. So come with me as I try to make sense of it all…
Nicolas Freeling was a British crime novelist who created the character and the world he inhabited. It was his principal claim to criminal fiction fame. So, a British writer was behind its creation. That made a British television company more likely to want to be involved in bringing it to the small screen – it was a popular series of novels. ITV made it. A commercial station who took a risk and Thames Television, known for such risks, was the company who stepped in to deliver.

It was also unusual. There was a fascination in the 1970s for Europe. It was a zeitgeist moment for television and politics. We were debating and holding referenda over our involvement in the European Common Market, as the European Union was known then, so this was bang on the money for the times.

The first three series were produced in the 70’s, from 1972 to 1977. These were the ones that I, as a young pup. would have watched. They anchored my understanding of the character as an upright man in a corrupting world.

The television series took inspiration and the characters of the novels but diverged from their plots. There was clearly an appetite for the world of the glamourous Amsterdam, but it was a holiday destination for many Brits, which had a very dark underbelly. It was here that the cynical and yet intuitive detective Commisaris Van der Valk worked. He was often in conflict with his superiors particularly Hoofd-commissaris Samson, who was played by three actors: Martin Wyldeck , Nigel Stock and Ronald Hines. The rotation of actors was a bit of a theme as Van Der Valk’s French wife Arlette was also played by three actors: Susan Travers, Joanna Dunham and Meg Davies.

Making up the team was his naïve assistant, Inspecteur Johnny Kroon, played by Michael Latimer.

Part of the major attraction was the location. This was not a British town or city where the gritty was what we saw and made us sit up and take notice. This had a degree of glamour as it was in Europe but also some of the seedy attractions of a place we associated with legal prostitution and drug taking. The fact that both were and still are openly legal in Amsterdam was the seedy attractiveness within which the titular character remained, largely, uncorrupted. Of course, he could, through his flirting with the politics of his job, make for enough of a drama that our watching it became even more attractive.

The gap between the first three series and the last two, which was the first revival in 1991/92 seems odd in one sense. If it was so popular, why did it not just continue after the 1977 series. The reasons behind that seem to be lost. That often just means there is no or little scandal, that the original series was not quite getting the numbers and then later there was a hint of nostalgia for it and the TV company sought to capitalize upon it.

The limited two series run in the 90’s seem to hint specifically at that. Foster reprised the role and was his usual principled detective, and though a little older, 14 years had after all passed, he seemed none the wiser. He was always world weary, and he brought that brand of cynicism to the screen better than most.

It was far from radical and far from new in its approach. The baddies were bad, often protected by a political system that was operating in its own gray area that was hard to believe in. Politics also made life difficult for the people trying to keep the peace. In the end, the 1990s brought more skepticism over Europe and we began to realize that a messy divorce was in the offing. It took a long time to materialize but the pathway to the fallout was already laid – Van der Valk was unlikely to survive that.

Unlike many series that started with a premise and then swayed from it, Van der Valk was a comforting throw back to a time when you got what it said it would deliver. It was cozy and it was good. Perhaps that was its downfall in the end. The remake for the 21st century is trying to walk away from such standard fare. But it was good. That appears to have been insufficient to make it last beyond the fifth series and it is consigned to the nostalgia bin – as a great piece of crime fiction, and a fascinating and quite unique piece of British/Dutch drama.