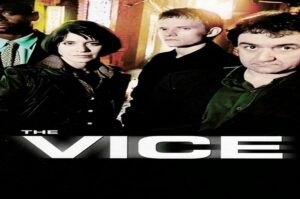 If The Vice did anything, it did two things: played about with the crime drama format and introduced us to a few actors who would become well known faces in many things thereafter.

Created by Barry Simner and Rob Pursey for ITV, it ran for 5 series and 28 episodes from 1999 until 2003. Produced at a time when the seedier side of life was gaining a little prominence, this was all about the Metropolitan Police Vice Unit in London. Run by an unconventional head, Pat Chappel, played by Ken Stott, it looked into the vice rings and sex trade in the capital. It could be argued that it showed the regulation rather than the policing of it. He had help in the form of PC Cheryl Hutchins played by Caroline Catz, alongside Sergeant and then Inspector Joe Robinson played by David Harewood – who made his name before going on to many different ventures, including in Supergirl – PC Dougie Raymond played by Marc Warren – who went on to become Van Der Valk and make a significant splash in the BBC’s Hustle – PC Kirsty Morgan played by Rosie Marcel, PC Adam Parkes played by Mel Raido, and Sergeant Stuart Cole played by Tamzin Malleson as well as the villain of the piece DS, then Inspector and then Chief Inspector Frank Vickers played beautifully by Tim Piggot-Smith.

Stott brought something worldly to Chappel and you could see from the outset that his relationship with his work was unhealthy. It was also a drama that was unafraid to lose its characters and use the realistic plots to show how the seedy side of life can quite literally be seductive. Warren’s character, PC Dougie Raymond becomes the first to fall victim but eventually by the end of series four, Chappel, having been investigating a pedophile ring, falls under the career bus. He ends up in a desk job which follows his unprofessional behavior, whilst he is already on the edge, as he investigates the ring. But his full fall from grace is still to come as he pursues his PC, Cheryl Hutchins, who was sent undercover and went missing until he finds her.

Unfortunately, it is in vain as her addiction to crack cocaine is beyond his capability to save her.

Whilst trying his best to right the wrong of agreeing to send her undercover in the first place he discovers that she was raped by the targeted pornographer. He loses it, ends up on a murder charge and instead of watching out for himself discovers he was being monitored and watched every step of his way by the man who throughout the series is his arch enemy – Frank Vickers. Played by Tim Piggot-Smith, Vickers was an old school villain. With a heart of black, coupled with a senior rank in the police force allows us to see that the maxim that absolute power corrupts absolutely is not only true but can be played out superbly. Smith is an old school style actor with a slew of English dramatic characters under his belt which ooze charm and the hint of aristocracy. Here it was played out with such charm and venom that it showed both Chappel and his team that the old school tie might always strangle their ambition.

It led to Chappel being up for murder and a new head of the team, Joe Robinson, who, having been Chappel’s greatest critic, is now beginning to understand what got him in the end. The final series is under his leadership.

That it ended thereafter was more to do with ITV wanting to move things around than Harewood not being able to successfully lead a major drama. It is inescapable that Stott’s presence and his tussles with Smith drove much of the overarching narrative, but Harewood is nobody’s second string. He was a substantial presence on screen but taking over from someone else is perhaps where it fell off the tracks – it needed the ensemble to work, the tensions between them to make it make sense. Had he been the established lead from the beginning it might have had a longer run.

But the seductive nature of Stott in the lead role, of a world-weary guy who was likely to do things ordinary mortals might do was never going to be Robinson’s approach and his character was never established in that manner. Robinson was needed as a foil for Chappel. The transfer of that conflict onto Vickers, never really worked as well, though it did lead to a form of Al Capone style ending…

Did Vickers get his comeuppance – you only have five series to get through to find out!

It was, however, the format that also caught my eye. It went between hour long single plot led episodes to plots being split over weeks and even in the first episode of series five – the last with Chappel – into a film length. It meant that you might not settle down to watch something in which you knew what was going to happen, but it was essentially a varied product with strength in characterization that carried you.

Chappel’s vulnerability which included his taking in and falling for a prostitute, trying to frame Vickers and just trying to be a decent man in an indecent world, was something which we might in the cold light of day question but at the time the storyline and the pace made it very believable. It is once again the evidence of how something which has strength in its development can become one of the best crime dramas on British TV.