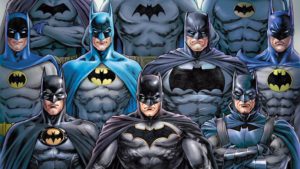 Over time, we have seen several films remade, and even debate that they should not have been remade. I personally would never want to see The Godfather movies remade. Trying to duplicate near perfection brings overhype and under performance as a near guarantee.

However, over time we have seen series, or franchises change as they continue. Star Wars had its prequels, its sequels and spin offs. James Bond and Jack Ryan became characters that grew with different actors to portray each of them as each new movie was released. Perhaps one of the most debated topics revolves around two characters within one franchise as films became released. Who played the best Batman, and who played the best Joker?

Batman originated with the old Adam West television series. Wearing tights and animated effects to identify fight sequences in the form of words like “BAM,” “WHACK,” “THUD,” and “POW” with every punch or kick. The series had a direct viewership to those with the kid like mind of idolizing the superhero mentality they may have perceived from the direct comic book these characters originated from.

Batman’s nemesis in the Joker villain was cast by Caesar Romero. Romero’s performance of the criminal mind was, well, clownish. Sporting the face paint and using his goons to further his agenda in crime around Gotham City often found himself coming to the scene as a lead maniacal bad guy who could contest Batman in every scenario.

As time went on, we saw the next cast of characters in Tim Burton’s Batman series to be Michael Keaton as Batman and Jack Nicholson as the Joker. The spin on both was more catered to the adult audience. Anyone who knows Tim Burton productions, the themes tend to be more to the darker side. Keaton’s Batman captured that to a “T.” Capturing the psychological landscape of how Batman was originated and executed as a vigilante in the night to fight crime with the hopes of cleaning up and reclaiming the city that took his parents. We come to find out that before the Joker is created by Batman to stop an organized crime leader in Gotham City, that the criminal was one Jack Napier, the murderer of Bruce Wayne’s parents. Nicholson’s performance is that of a chaotic organized crime boss driving the corruption by force in Gotham City.

Burton’s Batman’s would also include casting by Val Kilmer and George Clooney in the series. Kilmer portrayed a very disturbed psychologically struggling Batman, while Clooney played a depressing selfish driven Bruce Wayne who struggles with self-isolation. In the most recent Batman casting, we see Ben Affleck, who for as far as I am concerned, portrayed a worse Batman than Clooney.

In the 2000’s, Christopher Nolan re-casted Batman in his story of the caped crusader with Christian Bale. Bale drove a very strong and proper rich kid performance in the lost Bruce Wayne after the murder of his parents. The transformation of Batman became very real with the art of how he was trained to fight in a ninja like style in the League of Shadows. Taking on the darkness as an ongoing developing vigilante, he is met by Heath Ledger’s Joker. An Oscar winning performance by Ledger showed exactly how to create and execute off chaos. Out to create anarchy by pushing a rule free society in hopes for the city to implode and collapse on itself, he comes to be beaten by the humanity and compassion of those citizens he had relied on to crumble.

We also saw Suicide Squad’s Joker portrayed by Jared Leto, which was not very well received by the public, me included. While Leto is a great actor, his Joker was met with disappointment following the amazing performance by Ledger in the Dark Knight.
The latest Joker, in the self-titled movie, is portrayed by Joaquin Phoenix. The movie was met with raving reviews across the board. My take is pretty simple…Phoenix gave an amazing performance transforming into the Joker as a result to an ignoring society of the effects caused by depression. It was extremely dark and depressing to see the spiraling of a human life so out of control that he turns to a murderous psychopath. While his performance was one for the ages, the movie itself was far overhyped.

So which Batman and which Joker are the best? It is easy to argue that they were each the best for the portrayal of the actual character themselves. From a Batman perspective, my list goes as ordered: Keaton, Bale, West, Kilmer, Clooney and Affleck. The Joker is easier for me to pick the top. For me it is clearly Ledger. I would follow it by Nicholson, Phoenix, Romero and finally Leto.

Tonight, is movie night with the family, which really inspired this group of thoughts. The past two Saturday’s we have watched the Keaton, Kilmer and Clooney Batman movies. Tonight, we have set plans to watch The Dark Knight and Dark Knight Rises.

What are your favorite versions of these characters?