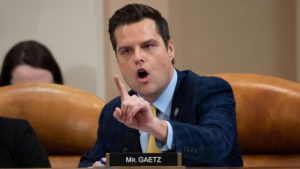 In a bizarre but not completely unpredictable turn of events, Rep. Matt Gaetz (Q-FL) has responded to the allegations of a DOJ investigation involving the congressman and his possible relationship with a teenage girl. The investigation which was opened under the Trump Administration and AG William Barr was released Tuesday afternoon.

Gaetz responded via Twitter with quite an explanation for the accusations. “Over the past several weeks my family and I have been victims of an organized criminal extortion involving a former DOJ official seeking $25 million while threatening to smear my name. We have been cooperating with federal authorities in this matter and my father has even been wearing a wire at the FBI’s direction to catch these criminals. The planted leak to the FBI tonight was intended to thwart that investigation.”

Adamantly denying the accusations, Congressman Gaetz continued, “No part of the allegations against me are true, and the people pushing these lies are targets of the ongoing extortion investigation. I demand the DOJ immediately release the tapes, made at their direction, which implicate their former colleague in crimes against me based on false allegations.”

Yikes. Where to even begin… time to get that popcorn ready folks, cause the shitshow seems to have started with a bang. Whether this ends with Gaetz being revealed as a stage five creeper or a former DOJ official — *cough* Bill Barr *cough* — actually tried extorting Gaetz for $25 million, we love to see it!