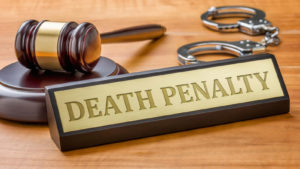 I love Virginia: not in the spring time, not in the fall but for every season.

Oh, I have never been there and to be fair, am unlikely to ever have the opportunity to go but if I did, I would because I love Virginia.

Because they abolished the death penalty.

One of the major differences that exists between the United Kingdom and the United States is that very topic. It is nearly 60 years since the last execution of a criminal in the UK and in the last few days and weeks of Donald J. Trump’s presidency we were aghast at the number of federal death penalty notices issued.

For us, the use of the death penalty is wrong.

I am sure there are people who are reasonable in their opinions that the death penalty is a reasonable method of justice but for us, it is both barbaric and open to question.
Firstly, it does not deter criminals. It may heighten the cost of punishment but the lack of evidence that it manages to stop people from committing crime, though difficult to definitively prove, has never been successfully made.

Secondly, it is irreversible. Mistakes in justice do happen. Look at the number of people who have been released due to wrong testimony or corrupt policing. Given the movement in the US to defund the police, are we reasonably suggesting that these same police officers are to be trusted in a court when a life is at stake? Even if the police officers were above reproach, human error in the stat sanctioned use of killing people could mean that an innocent person is sent to death. Is that really justice? Or is it simply revenge? In any country holding on to a Christian belief is it an eye for an eye or turn the other cheek?

Importantly, it’s a color thing. Oh, and a poverty thing. The fact is that the majority of people sitting on any death row – whether it has a long shelf life or short one – come form the types of deprived backgrounds that mean they struggle to get well rehearsed attorneys and good counsel. Dependent upon an over stretched public defender system, they end up with good people, in a crackpot system that struggles to beat the weight of evidence against them. In the UK, our prisons are filled with people who suffered trauma as a child, have dyslexia, come from lower socio-economic housing estates and are of color. Each of these are a significant factor in the lawlessness of which they have been accused.

If you think that criminals are only to be found in the poorest neighborhoods, then a walk into Wall Street might turn your head. The idea that somebody, is more likely to be greedy because they see others being better looked after is an easy claim to make. And it matters as much to people who are wanting a new Ferrari as it does to people who want to feed their kids. I leave it up to you as to which is the more heinous reason for lawlessness.

But it’s a personal view and as I said, I know there are reasonable people who believe that this form of punishment is right.

Which is why I love Virginia – the first southern state to agree with me! Oh I also love all the other states who don’t use it anymore and am happy to spread the love if more states decide to follow the example of Virginia…