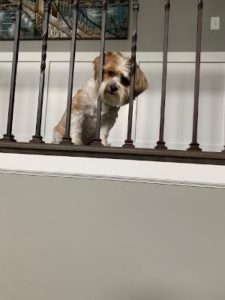 “Dog is man’s best friend”! I have heard this said time and time again. Indeed, we are a loyal bunch, and we usually reciprocate people’s loyalty by being protective, attentive, and loving. We appreciate a warm place to live, a cool drink, food, and the belly rubs and treats. We show this by giving kisses, smiles, fetching your newspaper or slippers, or simply sitting near you when you’re relaxing. We also have an uncanny ability to gauge when you are upset or in need of comfort. It’s at those times where we often remain the closest to you because, despite our inability to speak human languages, we can communicate the fact that we love you, we care, and we are aware of your emotions.

It is for these reasons that I struggle with the ways that humans interact with one another. Bella and I are family. We don’t have the same pup mom or dad, but we are family. When I sense that Bella is in trouble or that she’s being threatened, I come to her rescue, and she does likewise for me. Yet I see people turn their backs on one another. Sadly, I’ve even observed this amongst family members. Family members let things like jealousy, selfishness, ego, and spite keep them from being loyal. Humans have let similar things keep them from being united.

Some humans are impatient with one another or they don’t agree on the choices that other humans might make, or they don’t understand that others have limitations. This failure to be empathetic also serves as a barrier between humans. In a world of billons of people, no person should be alone. Everyone should have someone or a few people that they can count on. No man is an island.
Some humans also have short memories. They may have forgotten about the times that they were vulnerable or needed a kind word or a kind deed from another. Kindness is contagious! If one person exercises kindness to another person, hopefully the other person might be encouraged to spread that kindness on to others. Wouldn’t the world be a better place if everyone just exercised one act of kindness a day? The kindness could be evident by a kind word, a kind deed, speaking in a kind manner, showing humility, holding a door open for someone, or asking a person who appears to be struggling whether they need help or not.

I often hear humans refer to themselves as being the most intelligent species on the planet. They point to many modern advances. They say that they invented things such as the cell phone, the automobile, and the airplane. I agree and I marvel at those inventions. Yes, humans have cell phones where they talk to one another, but do they listen to each other? Humans have automobiles, yet would they walk a mile to help their fellow man out? They have planes that travel around the world, yet do they reach out to people in their neighborhood or even people in their own families?

You know, humans have a big advantage in that their intelligence enables them to do great things, yet the greatest thing that humans can do for one another doesn’t require exceptional intelligence or ability. It requires the ability to have empathy, show compassion, and listen. Sometimes it just requires being patient and supportive. Sometimes people just want to know that someone is in their corner. Empathy is free.

Humans can learn a lot from dogs. Maybe one day, we can train humans to be friends to one another