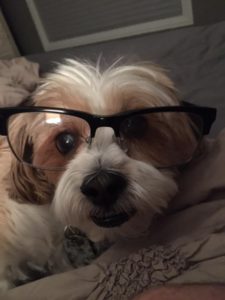 I’m not sure if most people are aware of this, but we pups have social media too. It’s called “Furbook” and we share pictures of our pups and our family. We catch up with one another, and we express our viewpoints on current events. It’s like Facebook in that everyone who chooses to do so has a platform to express their thoughts to the world.

I like Furbook because I can keep up with the pups that I went to Obedience School with. I also get a chance to see pictures of relatives and keep up with what’s going on in the community that I grew up in. Lately, however, Furbook has taken on a different tone. For some reason, certain pups feel that it is ok to spout insults at one another and to say things to one another that they would never dream of saying in person. When others object, those pups usually make some excuse, blaming the objection on political correctness culture or somehow making themselves the victim. I take issue with this and here’s why.

We are all different. We have different temperaments. Some of us are more outspoken than others. That in of itself isn’t an issue. The issue comes when someone is rude or misattributes something to another and refuses to recognize their error. If a pup calls another pump fat and others object to that rude comment, using the excuse of “I’m not a politically correct pup” is just that, an excuse. It is an attempt to deflect from being rude and ill-mannered. We learned in Obedience School that not only are these types of attacks unnecessary, they also lead to a snow-ball affect of bad feelings and rude behaviors. When another pup steps up and calls the pup out for his rudeness, this doesn’t make him a victim. Trying to play the victim after poor behavior or rudeness is simply an attempt to deflect from the original issue. People and pups need to stop using the Politically Correct culture as an excuse for rudeness and bad behavior. We also need to go back to a time where manners were not only appreciated, they were expected. It is not necessary to get on social media and say mean and ugly things to people and pups that we don’t know. Interestingly enough, acting in this manner shows more about the rude person than it does about the one who is being criticized.

We have to get back to a culture of civility. We have to be mature enough to realize that not everyone thinks the same or has had the same experiences. When we disagree, we have to be able to express ourselves without attacking one another.
We often bark about the violence that is in our society, but so much of that violence is verbal. The only way that we will restore civility to our society is by controlling our thoughts, our speech, and as a result of this, our actions. So let’s reject the thinking that rudeness is a free for all that anyone can indulge in at any time. Let’s value diplomacy and kindness. Let’s elevate our manners and in this way, our society.