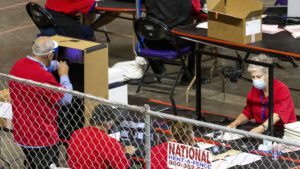 I have a theory. This is only a theory. By no means is this a conspiracy theory which is defined a “a belief that some covert but influential organization is responsible for a circumstance or event.” A conspiracy theory would technically define the basis for the Arizona 2020 Presidential Election recount. The conspiracy theory leading to the recount pushed by none other than the orange monstrosity and his sycophants, our very own twice impeached president that is the ultimate definition of a sore loser who will continue to maintain a lie to dupe the masses of his loyal followers. That conspiracy theory he continues to push is that the 2020 election was “stolen” due to veer fraud. The conspiracy theory that has thus far led to federal and state charges for almost 450 people and the arrest of nearly 300 of his most devoted followers who “stormed” the Capitol building on January 6, 2021 in an effort to stop the constitutional duty of Congresspersons and Senators of the United States to count electoral votes which validated the election of President Joe Biden. The conspiracy theory that has led to the continued divide in United States society.

In Arizona, President Joe Biden received 1,672,143 votes (49.36%). The orange monstrosity received 1,661,686 votes (49.06%). Additionally, Jo Jorgensen (LB candidate) received 51,465 votes (1.5%). President Biden was awarded Arizona’s electoral votes, contributing to the total 306 electoral votes he won over the orange monstrosity’s 232 electoral votes. Apparently, the Republican Senate legislators in Arizona have a problem with a democratically held election and wish to magically find 10,458 votes, a tactic that sounds eerily familiar to those of us here in the state of Georgia. According to The Hill, “Republican state senators used their subpoena power to demand that election officials hand over all of Maricopa County’s 2.1 million ballots, as well as its voting machines and voter registration information.”

Now, there is no evidence of voter fraud that has been announced since the beginning of this recount beginning in April 2021. Prior recounts, according to NBC News, indicate “the state of Arizona and Maricopa County have already conducted numerous accuracy tests and hired two independent outside companies to conduct a forensic review of the results of the election; these reviews all confirmed that the county system performed properly.”

But the Republican Senators of Arizona are not moved by facts. They have consulted a company called CYBER NINJAS that knows better than all those pesky constitutional lawyers about election law to recount the votes! According to the Associated Press, “the Florida-based consultancy has no election experience and is run by Doug Logan, who has shared unfounded conspiracy theories claiming the official 2020 presidential election results are illegitimate.” And true to their name “Ninja”, they operate in full secrecy, not allowing any press that would be considered liberal mainstream media get in the way of their lack of transparency. Even an Arizona Judge sees absolutely no problem with their methodology nor [lack of] expertise, despite the fact that the “hand counters began the day using blue pens, which are banned in ballot counting rooms because they can be read by ballot machines.” Also please know that they are skilled in cyber-detection of potential interventions of such groups as Antifa, those pesky hell raisers that apparently also raided the Capitol building on January 6, 2021 as per the more ardent followers of the orange monstrosity.

Cyber Ninjas has been seen utilizing either black lights or UV lights to scan the ballots after they have been recounted. This is where my theory comes in, so please pay attention because I will employ the same degree of logic that they seem to utilize in this recount. My theory is based upon that infamous quote by a well-known self-proclaimed “stable genius” that goes, “I said supposing you brought the light inside the body, which you can do either through the skin or in some other way. And I think you said you’re going to test that too… So, we’ll see, but the whole concept of the light, the way it kills it in one minute – that’s pretty powerful.” (By the way, Happy Belated One Year Anniversary of this spectacular quote!)

You see, the ballots are saturated or bathed in UV light thanks to the Cyber Ninjas, who will then take these ballots into some type of secure trunk or some other box… let’s call it an “ark”. After the completion of the recount, the box will then be transported, to a secure location, perhaps to a secret island base near Crete where it will be kept hidden for centuries, awaiting a figure such as, let’s call him Indiana Jones for example, to find it. He will discover the Ark and upon opening it, all of the stored UV light waves within the ballots will then meld together to emit something like a “powerful light”. The “powerful light” will “enter the skin” of people across the globe, thus curing the next pandemic to befall the globe. Magnificent, scientific, “pretty powerful”. QED

This is my theory, it’s only a theory…and it’s no more plausible than this ridiculous Republican led Arizona recount reaching a conclusion that leads to a different outcome for the United States 2020 Presidential election. But that does not keep me from awaiting the opening of the UV ark in the future, because I am a self-described stable genius and in the United States I can make up any alternate reality that fits my ideological world made up of alternate