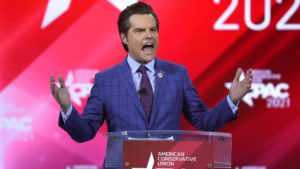 Well, that Rat-Funk, Slime-Ball, Piece o Peat Moss, Cowardly Homephobe Gaetz, has one foot on a political banana peel and the other walking into the United States Penetentiary Dept. in Atlanta, Ga., any day, now. I can’t wait!

He has done as much harm as he possibly could, while supposedly serving his Floridian Constitutes; way before pizza-gate, with his disgusting sophomoric antics that need no recapitulation.

The Feds are now bringing his former girlfriend, A.K.A., Skanky Bottom, a second key witness in the ongoing investigation involving the Former Tax Man, Joel Greenburg, whose chicken shit ways will have him singing like a canary, turncoat rat that he is, tattling on himself and his twenty-four charges including Sex Trafficking involving a minor, like Alfalpha, on “The Little Rascals”, any minute now.

Matty’s going down. His GOP Cronies aren’t even pissing on his body, which is about to be engulfed in the flames of Truth, being unleashed on all o’ “them” (sic) MFkrs.

Let’s not wave our American flags yet. Let’s wait till this decrepit neo Nazi piece of trash is in handcuffs, being

led to the gallows. Well, one can dream, no?

See you on the Funny Papers, Tweeps.