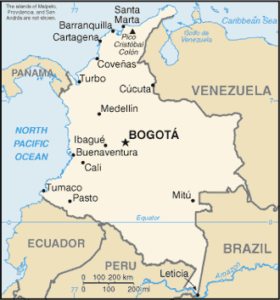 Due supposedly to a tributary reform in response to COVID 19 Colombia has been under siege by vandalism, looting and riots attacking the police and armed forces, when in reality this is because of a false peace process that had no accountability for the criminals assaulting our democracy for decades. I wanted to try to communicate a very serious issue that is happening in Colombia, South America. Colombia is a Democratic Republic probably the oldest in the region, and like all other countries is currently trying to cope with the difficulties of life post COVID 19 and strong problems with economic inequality.

The country has had civil unrest (war) for more than 50 years and in 2017, a supposed peace treaty was signed, but we still have guerillas attacking and trafficking drugs. This country has seen too much violence, from the FARC since 1964, ELN 1964 and M19 1970 all of which are guerilla groups with Marxist and Leninist backgrounds or simply put communist. Add to this all the drug wars from the 1970s to end of the 1990s with the different cartels and drug lords, because after the 90s the guerillas became the defacto drug lords. Oh and we cannot forget the paramilitary groups that were initiated by the drug lords to protect their productions and transport from the guerillas, which in itself caused more violence and bloodshed.

From the 1970s to the 1990s, the three guerilla movements caused constant bloodshed and turmoil in the country, for a time the M19 was even financed by Pablo Escobar and in 1985, they laid siege to the palace of justice causing the deaths of over 100 people including 21 judges. The then president Belisario Betancur negotiated with the M19 for the release of the palace siege and in turn pardoned these murderers where none of them did a single day in prison for their crimes, nor made reparations to the victims, including Gustavo Petro (Twitter @petrogustavo), honorable senator since 2010. Now with the M19 accepted into politics as a party this left the FARC and ELN.

As of 2002 – 2010 Alvaro Uribe Velez (Twitter @AlvaroUribeVel) was elected president and continued his life long battle against the guerillas and criminal elements of Colombia. During his presidency the guerillas were almost completely dismantled, he extradited the 14 top paramilitary leaders to the US to stand trial and pay for their crimes, also dismantling the paramilitaries of Colombia by doing this. He managed to liberate 15 hostages from the FARC on July 2, 2008 in Operation Jaque, 3 American contractors and 12 Colombians, without a single shot being fired and no casualties. To many Colombians he is the greatest president the country has had.

Fast forward to 2017 and the signing of the “historic peace” with the FARC by the then president of Colombia, Juan Manuel Santos (Twitter @JuanManSantos), which did nothing but create a greater burden on the country. None of the leaders of the FARC have done a day in prison for their crimes, which range from, murder, kidnapping, extortion, rape, forced abortion of rape victims, forced recruitment of minors and last but not least drug trafficking. Additionally the ex-president was so generous as to give pensions to 8,000 guerillas and 10 senate seats to leaders of the guerillas and of course, we cannot forget to mention the JEP extraordinary justice for the peace, which is the only court, allowed to try the guerillas. FARC now called Comunes (Twitter @ComunesCol) with their leader Rodrigo Londoño (Twitter @TimoComunes) and other members like Sandra Ramirez (Twitter @SandraComunes) are trying to rewrite Colombian history so they are known as heroes and not the criminals they are. All of this came to be after the country voted on a peace referendum and voted, no for the peace agreement, because of all the pardons and benefits for criminals with crimes against humanity. The president who was initially supported by Alvaro Uribe Velez but decided it was better to deal with criminals than make them pay for their crimes and who after finishing his term moved to a luxury apartment in Florida with his false Nobel peace prize. Now the FARC/COMUNES have three branches, they have bought the courts, the 10 senators and of course the supposed dissidents who return to conflict and did not uphold the supposed peace treaty.

There is a significant number of victims Corporacion Rosa Blanca (Twitter @CorpoRosaBlanca), which are women who were forcibly recruited into the FARC as young girls, raped then forced to abort and tortured to be part of the guerilla movement. No one has heard their cries of justice and the UNHRC has done nothing to seek justice for them.

All right now that we have finished the short history lesson please check the information yourselves just do not use Wikipedia as your primary source of reference. Colombia has been in the news recently due to protests and strikes, during our third peak in the pandemic, supposedly because the police are killing innocent people. This has been the most massive disinformation campaign orchestrated by the guerillas and drug traffickers ever. I grew up in the states mainly NYC and firsthand witnesses more than one case of police and excessive use of force; I can assure you that is not the case here. I have been living in Colombia for more than twenty years now and work as an interpreter and teacher, so I have no connection to politics and have nothing to gain by lying. I do have much to lose if people like Gustavo Petro (ex-M19) past candidate for president, attain power, many believe Colombia will be similar to Venezuela but I fear it may be much worse and we may become a full-blown Narco-State. This essentially means democracy would die and Colombia would be yet another puppet dictatorship in Latin America. Our Police force is comprised of normal everyday people who are mothers, fathers, sisters, brothers, daughters and sons, not monsters nor bloodthirsty killers. These are very brave people doing a very difficult job in a much more complicated time. All I ask is that you inform yourself properly before passing judgment on these people; social media has become a tool to misinform and destroy a person’s reputation. In the past week scores of fake videos have been posted blaming the police for everything but no videos are being shared showing the looting, vandalizing, assaults and attacks on the police because they were told not to use their firearms against the protestors.

Several police stations were burnt to the ground and the criminals (not protestors) even tried to burn the officers in them alive. Ivan Duque (Twitter @IvanDuque) our democratic president has been under attack by the UNHRC, going so far as to call this government a dictatorship oppressing the people. Nothing could be farther from the truth, the man has proven himself to be a patriot who cares for his people and country and is now battling the guerillas, criminal organizations, foreign actors (UNHRC) and of course COVID 19. This has been a complete abuse by those interested in overthrowing the legitimate government and using urban terrorism to destabilize the country. These protests/strikes (urban terrorism) were organized and called together by Gustavo Petro and incited to violence by the same and those of his party and the historic pact, which includes the 10 guerillas senators.

Right and Left in Colombia are very different from any other democratic country; our left is literally full of criminals who never paid for their crimes and who want to turn Colombia into a Narco-State dictatorship. I urge you to please look carefully at the news you are being fed and consider the source carefully.

I would just like to take a moment to thank “Bad” Brad for the opportunity to share this with you and I hope this finds receptive minds willing to research the facts and find the truth, I graciously thank you for your time and patience.