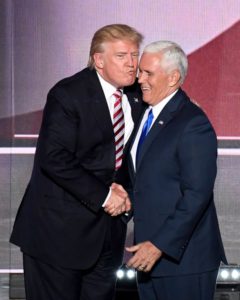 Mike Pence dropped his candidacy for reelection as Governor of Indiana on July 15, 2016 only an hour before the deadline; which began his time to run with Trump as his Vice President. Pence made a statement before Trump picked saying Trump was a great golfer and he beat him like a drum. Over the course of watching Pence and Trump the person who used that phrase was Trump. In my eyes it looked like Trump tested him to see if he did not mind lying for him. He did not mind lying for Trump.

During the Trump presidency Pence spent a lot of time running defense for Trump. The previous Republican Vice President was Cheney who most people accused of actually running the show because they felt Bush was not capable.

Now we had a guy who was an absolute push over. I remember Trump being in trouble with the Ukraine scandal. He promptly threw Pence under the bus. I don’t know if that was a if you impeach me you got to impeach him move or if he felt Pence would give credibility to his actions on the Ukraine phone call. No matter the plan, Pence was safe in the long run. Trump got impeached but was never convicted in the Senate. Pence played the game of covering for Trump. He was put ahead of the Covid taskforce and seems to be thriving to finally have his own thing. That did not last long. Trump could not stand the attention going to Pence.

Pence was a trooper for Trump. He was an Evangelical but still found it okay to lie for Trump. He looked at Trump like he had finally found the love of his life. He seemed to enjoy the game of spinning the truth. Nov 7th Biden was announced to have won the presidential race after 4 long days of counting the votes. Pence tried to stay out of the sight of cameras because he was being pressured by Trump to say they actually won, but a month later, January 7th, it was Pence who had to deliver the news that Biden had been certified as the American president. It should have happened January the 6th, but a mob of Trump supporters stormed the Capitol. They brought a noose and chanted hang Mike Pence. The Congress and Senate were delayed until the next day when they voted after 3:00 a.m. Pence did the job he was elected to do.

Since that day Pence stayed quiet for a while but then popped back up to say Trump and I do not see eye to eye on January 6th, but I am proud of the work we did for those four years. I suppose that means the deaths of over 400,000 Americans because of Covid with him as the leader of that task force was a proud moment for him. I translated that statement to mean Trump is still mad at me because I did not just name him as the president and I am hoping he sees that I remained faithful for the last four years. I even let people die so that I could be seen in your corner. Who knows maybe I need to work on my translation skills but that is what I heard him say.

How do you think it feels to have to kiss up to the guy that almost had you murdered? Pence came close to death and Trump did not even pick up the phone to see if he was okay. Even after Pence made the statement of being proud of the four years he had with Trump, Trump went on Fox news saying it was Pence who did not do what he needed to do to keep Trump in as the president. Trump has made him an enemy of the Republican party. Pence had a job as Governor and gave it up for Trump in hopes that he could be the next president after Trump. Now his name is mud in the Republican party. The four years he spent kissing up to Trump meant absolutely nothing to Trump. In the eyes of Trump he needed to be willing to break the law and do as Trump desired and Trump would be president and have the ability to pardon him for his actions and it would have been a win for them both. Pence has since declared he is with the constitution. What? With the constitution? Where was that the last four years? Where was that when Trump lost and we all knew he lost but you stayed quiet hoping not to piss him off? Where was that after you left office but you refused to speak out against January 6th and the officers that protected you that day?

Pence had an opportunity to break with Trump after Trump sent people to kill him, but he tried to play the political game of walking the tightrope and hope he can still be Vice President if Trump ran again. It was not until he was rejected by Trump that he finally chose America. Pence, you made your bed and now you must lie in it and for Pete sake quit pretending like you had a choice in choosing the constitution because we all know you chose Trump and he rejected you so you chose the constitution because you had no place else to go.