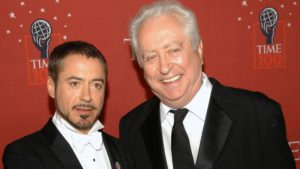 Robert Downey JR. posted about his father’s passing on his Instagram in a statement saying, “Last night, dad passed away peacefully in his sleep after years of enduring the ravages of Parkinson’s…he was a true maverick filmmaker.” He was 85.

Downey SR. is known for having written and directed the underground film PUTNEY SWOPE (1969), a satire on the New York Madison Avenue advertising world. His additional directing credits include A TOUCH OF GREATNESS (1964), STICKS AND BONES (1973), THE TWILIGHT ZONE (1985-1989), HUGO POOL (1997) and RITTENHOUSE SQUARE (2005).

Ringside Report sends our condolences to Robert Downey Sr.’s family during their time of grief.