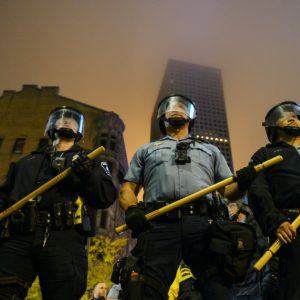 No one can disagree on the benefits of unionization. After all, someone has to protect the little guy when corporate greed supersedes the needs and safety of their employees. Unions have been successful in decades past. Advocating on behalf of their members for better, more stable wages, paid time off, reasonable hours and affordable health care. But recent years has seen a decline in the unions of old. The ones that exist today are a mere shadow of their predecessors. That’s if they’re available at all. Just recently Amazon employees in Georgia declined to unionize, even as reports of poor working conditions have exposed the downside to not having worker protections.

But while some unions have all but disappeared, one particular union is getting stronger and frankly more dangerous. The police unions. While there are different unions representing different officers and departments around the country one thing is certain, their main objective isn’t policing, but power. Political power. With tens of millions of dollars spent to lobby and influence state, local and federal politicians to rule in their favor and kill any legislation that would seek to loosen their grip on autonomy.

For nearly a century, law enforcement officers have sought to organize and protect themselves from prosecution for abusing their powers. A department steeped in racism and white supremacy that has permeated all levels of police. In 1950, former Los Angeles Police Chief William Parker was notorious for his views on people of color, and vocal and unabashed racism. His speeches were laden with dog whistles, and he would frequently use the term ‘Thin Blue Line’ in an attempt to fearmonger, and pander to white Angelenos worst fears.

The ‘60s would see police unions lobby and campaign more aggressively. In 1966 the NY President of the Patrolmen’s Benevolent Association John Cassese would openly oppose, then NY Mayor John Lindsay’s attempts at minor police reform. Cassese also said that the police cannot pander to the whims of the black community and their gripes. This obviously resonated with citizens. Lindsay, a Republican, was a pretty popular mayor until going up against the police union. He had no idea that he would be maligned and relegated to the background. The city eventually shot any measures down. This was paving the way for police unions using their collective power to essentially bully those who they saw as a threat to the status quo, and it wasn’t long before Democrats and Republicans alike began to fall in line. To do otherwise would kill your political career.

With the Police Officer’s Bill of Rights, LEOs are offered a wall of protection that virtually make it impossible for oversight and accountability, the expunging of misconduct records, means an officer with multiple complaints can go unpunished, or move around departments with a clean slate. Qualified immunity, which makes officers safe from personal financial liability is further proof that the combination of policy, political power with the discretion and control over whether someone loses their freedom or worse their life without the benefit of civilian oversight is a dangerous one. We only need look at history and statistics. Over 5000 civilians, of all demographics, have been killed by police in the past 6 years. With roughly 5%, or 7 officers having been convicted of murder.

Now don’t get me wrong, unions are not all bad. Not even police unions. They can help protect those officers in the event of false allegations and helping to protect pensions. But when you have some law enforcement officers making less than $11 an hour and having to work copious amounts of overtime or take second jobs just to make ends meet, makes you wonder what exactly the unions are doing for these officers. And the Back the Blue/Thin Blue Line crowd is radio silent when it comes to this. Small and major cities alike lack the budgets to properly compensate those tasked with protecting and serving their communities. Even large states, having seen tax revenue fall drastically, are finding budget shortfalls. State and local police departments rely on public funds, federal grants, fines and fees and private donations. Business sales taxes and property taxes are significant to funding law enforcement agencies.

There are many reasons for the shrinking city budgets. Rising healthcare costs and pensions are a huge part. While there has been much talk about defunding the police in the wake of the killings of Botham Jean, Atatiana Jefferson, Breonna Taylor and George Floyd at the hands of police, the truth is police in many cities get the bulk of city funds. Infrastructure, schools and community investment has suffered. The money needs to be reallocated. Reforming would be a better word than defunding. From the unions on down. It is time to bust up the unions and loosen their grip on unfettered power and influence over our government agencies and representatives. There needs to be accountability and transparency. Where is the union money going? It doesn’t go to police salaries, it doesn’t go to health care, it doesn’t even go to pay for the multi-million dollar settlements paid out to victims of police brutality and sometimes murder. Cities are responsible for litigation costs, with some paying as much as tens of millions of dollars to defend officers accused of overstepping their authority. Money that could be poured back into the community to mitigate crime and encourage positive behaviors.

New York City and Chicago have two of the largest police budgets. With NYC seeing 25% of the general fund going to policing, Chicago tops the list with a whopping 37%, or $1.6B. Yes, BILLION going to policing. Chicago has been in the news a lot lately due to the increase in gun crimes. Yet with a budget in the billions, the unions and the GOP like to play the blame game and make it a partisan issue. In addition to having such a large police budget, that hasn’t staved off violent crime, Chicago also has one of the highest annual payouts in settlements for police misconduct. $467M over the past decade. Second only to Los Angeles, which has paid out an astounding $1.7B over the same time period. Money being paid out by the very tax paying citizens that are victimized by those same officers. Tax dollars used to subsidize bad behavior all condoned by the police unions. That needs to change. It’s time to shift responsibility over to the unions. Follow the money. If they had to pay out of their coffers for the misconduct of their members, they would be more inclined to police their own instead of doing all they can to subvert democracy and justice. Police unions have become more interested in and effective at protecting the bad cops than promoting, helping and supporting the good ones.

There needs to be a culture change in this country around law enforcement and community involvement. Police don’t need to respond to every call. In Fresno for instance, out of nearly 3000 calls a day, roughly 1500-1700 are non-emergency calls.

Cities around the country have been making steps to bridge the gap that exists between officers and the communities they serve. Some are more comprehensive than others. And despite the fact that there is pushback from unions, 21 states have enacted some legislation in regards to oversight, with 17 currently drafting such legislation. From Blue states like New York and California, to Red states like Texas and Oklahoma. Colorado has gone farther and banned chokeholds, removed qualified immunity and will be requiring all officers to have and wear body cameras by 2023. Both Democrat and Republican legislatures have realized the need for police reform. At least on the surface. Most GOP states, have pending legislation only.

Arlington, TX has been recognized by the Department of Justice as one of only 15 departments in the country that has increased community engagement and working to build trust with citizens. Omaha, NE has a budget of over $1.2B despite having only 70K more people than Arlington, which has a relatively low budget of $118M. This supports the theory that less police and more community involvement goes a long way. When police see community members, not as the enemy but as human beings, there is less potential for violent interactions between the two and less need for unions.

New Orleans PD, city was once termed the murder capital of the USA and simultaneously deemed the most corrupt law enforcement department in the nation. With a long history of civil and constitutional rights violations due to lack of oversight. With a police budget of $194M compared to community investment of $56M, the city of New Orleans was less concerned with its citizens, than its police force. That changed with NOPD began operating under a federal decree in conjunction with the DOJ. One that places an emphasis on what they call humanistic policing. A peer intervention group for officers called EPIC (Ethical Policing is Courageous) was started that allows lower ranking officers to confront high ranking officers without fear of retaliation. Something police unions have fought to derail.

The bottom line is that police unions in their current state are outdated and corrupt organizations reminiscent of the mob corrupted unions in the ‘60s, ‘70s and ‘80s. Existing to intimidate citizens, bribe politicians and stay in power. Using Back the Blue and the Thin Blue Line into scaring citizens into supporting their system and encouraging donations from officers who already don’t make nearly enough for the job they do. And for all the money spent on union and police department budgets, there isn’t a whole lot of crime solving going on. 40% of homicide investigations go unsolved. Over 30% of rape cases, and among property crime, 83% are uncleared. This is the part they don’t tell you. So with billions in funding, where is the money going? Unions serve little purpose these days than as political propaganda machines who have politicized their power to the detriment of American citizens.