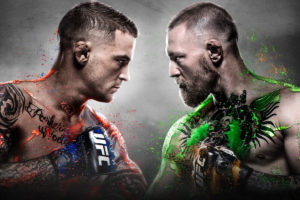 Sports entertainment consumes many of our lives, usually as a release to the stresses of the typical grind of everyday life. Some, sports is life and they work to feed that addiction. As sports fans, we all have our favorite teams, players/athletes and rivalries that amp us up more than usual. The pinnacle of the sports world this past week was the trilogy fight in the rivalry of Dustin Poirier and Conor McGregor.

This speaks volumes in several ways. The first being the complete rise over time of the empire that is now the UFC. That rise topped major sporting championship events like the NBA Finals, soccer and golf this past weekend, along with the ESPY awards. Between pay-per-view and the gate at the T-Mobile Arena in Las Vegas, UFC 264 was the most watched sporting event of the weekend across the world.

While that is surprising in the big picture to the sense of the magnitude of growth the UFC and mixed martial arts has had on the world, it is no surprise that all eyes would be on Conor McGregor. That is a typical event. Conor is outspoken, confident, heck he is arrogant, thus very entertaining. He talks smack. The pregame intimidation factor is as smooth as Ali was with words and as intimidating as Iron Mike Tyson before any fight. These antics instantaneously draw a desire to see him put up or shut up. I mean, people will pay attention with hopes to just see him lose…that is influential and, in many ways, extreme respect for the fighter.

Saturday night, I sat down with my wife and two daughters, who love Conor. The fights on the card for UFC 264 were good to begin with, and I will touch on one fight in a moment. But when the headline is the ideal rubber match in a trilogy between two fighters at different trajectories of their careers in the show stopping McGregor and a very hungry Poirier, it is kind of hard to focus on anything prior to the start of that fight.

There is a history between the two fighters that goes back about 7 years. McGregor took the UFC by the horns back when he arrived 8 years ago and a young Dustin Poirier was just another ant in the way to the top for McGregor. His dominance was nothing short of astounding as he climbed the ranks to be champion, and the first ever simultaneous dual division champion. The turning point came at UFC 168 when McGregor lost to Nate Diaz. Since then McGregor has not been the same. Though he came back to beat Diaz in the rematch, he took a brief retirement from the sport soon after and ventured into fighting Floyd Mayweather in a boxing match. That boxing match clearly demonstrated the lack of conditioning McGregor had and Mayweather, JR. took advantage of the jelly legs in the later rounds to win. Though McGregor would make his way back to the UFC, his consistency in being able to compete and win has dwindled. His mouth would never let you believe that but trust your eyes.

Poirier came out 6 months ago and took the second match from McGregor and viciously attacked Conor’s legs chopping him down with calf kicks. It got to the point where Conor really couldn’t even stand. This fight was just another solid victory for the momentous Poirier, who has just taken everyone down besides Khabib in his last 7 fights. His trajectory clearly on the rise compared to Conor’s.

The third fight started as intensely as you can expect. Conor came out kicking- almost like his point was trying to be made that he can attack the legs as well. One kick specifically early in the round sounded thunderous and you immediately see Poirier check the kick and point at McGregor. At the time, I thought he was taunting him or something of that nature. The two would exchange blows and eventually Poirier would get Conor to the mat and the battle would ensue with some heavy blows from Conor and some heavy elbows to Conor. Watching the fight in real time, it is easy to say Poirier was controlling the fight and it was going his way. It is also easy to know that fighter’s get stuck, and these guys can grapple; point being, unless someone gets slept or taps, anything can happen up until that point. Something happened…

Conor went to go for a left hand and in real time, it looked like he slipped and whiffed. Poirier followed McGregor to the ground and the grappling continued until the end of the round. Conor did not get up. It was at that moment that those of us watching real time notice Conor pick up his foot and place it in front of him. It was clearly a gruesome injury, though until replay, it may not have been noticeable as to how gruesome it actually was.

The fight was ultimately stopped, and the decision would go to Poirier. During his post-fight interview, he mentioned that point in the fight where I thought he was taunting McGregor by claiming he was calling out that he thought by checking that kick, he felt Conor’s leg break, meaning he broke it there, and the tort from the whiffed punch just snapped it completely. No one wanted to see the fight end this way, and everyone, even Conor, is in belief there will be a rematch to conclude this saga appropriately.

Following the fight, the internet did what the internet does. Memes and “told ya so’s” were blasting everyone’s feeds. Look, I am all about cheers and jeers, however, no one should hope and celebrate that kind of injury to someone. Khabib went as far as tweeting that “Good always defeats evil.” McGregor had the burning heart in place, his body cried “stop,” but his spirit is crying “never.” A clean break of a bone that stops a fight in such a gruesome fashion wasn’t some sort of plea from Conor to quit.. McGregor’s mouth definitely calls for some ridicule if he loses by getting whipped, but a gruesome break of a leg is not a testament to his skill or the true outcome of a defeat.

All that stated it is clear Conor is not the same fighter he was. There is no denying that, but he will continue to draw numbers when he enters the octagon. I wish him a speedy recovery and hope he can get back to a proper level of strength and competition after this event.

I did mention I would note another fight on the card. The Sean O’Malley fight earlier in the night was one worth of mentioning for a couple of reasons. First, “Sugar” Sean O’Malley is clearly the next big rising star in the UFC. He has been noted as such since he appeared on Dana White’s contender series a few years back, But his fighting style is similar to McGregor’s in the fact that he can strike with authority. O’Malley plastered his Cro-Magnon opponent for all 3 rounds landing over 200 significant strikes and around 80% of those to the head. But it is not just his fighting capability at this stage in his fighting career that ties him to Conor, but rather that “x” factor, that charisma that draws humor and confidence to the ring. He is not nearly as offensive as Conor, however, his self confidence is at McGregor level. Watch for him on the way up in the future of UFC!