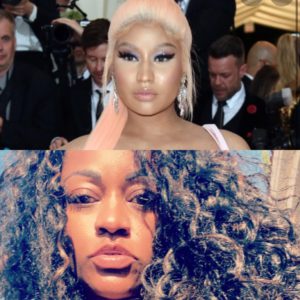 For the past few days, people have been having a good laugh at Nicki Minaj’s expense. Or ignorance, depending on how you see it. But for me, the issue is much deeper than that. One about using your platform to stroke your own ego over standing up for those who look to you for inspiration. Nicki failed to meet that moment.

Many years ago I knew this girl. She was about 11 or 12 years old at the time. Excited over being invited to a get together with the popular kids. Wearing black and yellow leggings with matching top. Hair in a side ponytail with black and yellow bows. Looking back, she looked like a bumblebee.

The kids were drinking. Not unusual at the time. We all did. But one of those guys she recognized from class, he said “come here, I wanna show you something.” She went. Led to a dark room before she was grabbed. There her classmate and a guy she’d seen around. She was thrown on a bed and her arms held as the older man stepped out of the shadows. His only words ‘you owe me’. Her yellow pants pulled down as he climbed on top of her. Unsuccessfully trying to penetrate her. The sound of footsteps in the hallway being all that stood between the complete loss of childhood and him ‘getting his due’. Pulling up her pants, she ran as fast as she could. That girl was me.

I know both their names. They’re burned into my memory. One was 17, the other 23. Me, 12. A girl who still played with dolls and had a She-ra alarm clock that woke me up every morning.

The following day, as I walked the halls of junior high, I felt all eyes were on me. Slut. Whore. He sat next to me in class. Carrying on as if the world was normal. My mom had her own issues, and I was thousands of miles away from anyone who loved and could protect me. I had no one but myself. I was being punished for being pretty. How dare I. So I chopped off my hair to within an inch of it’s life. If this is what I would get, then I didn’t want to be pretty. I didn’t want to be noticed.

When I first heard about Nicki Minaj’s brother being on trial for sexual assault of his 11 year old step-daughter, I wasn’t as surprised as I should have been. It took me back to places I would rather forget. That was long buried. That it took her 8 year old brother walking in on Maraj violating his sister to get her some type of relief is the real sadness.

Imagine being that age. Remember being that age. The pain and humiliation at the mercy of a man she trusted. Four times a week. Up to twice a day being raped both vaginally and anally and told you would be sent away if you talked. It took her younger brother telling school officials and eventually CPS what he saw for action to be taken.

A 6th grade honor roll student who had hopes and dreams. Who still had light in her eyes. Who became withdrawn, suicidal and without hope.
Two years later, at 13 years old, Maraj’s victim would take the stand to detail her abuse. The threats and intimidation. Told that she had no voice and was his puppet. Her step-father. The first time he raped her and ejaculated in her mouth. An 11 year old girl. Being told it’s your fault, and that you were giving off signals. She was 11. He was in his 30s.

Unimaginable abuse at the hands of the brother of one of the biggest superstars in the world. But when it all came to light, instead of standing up for a girl who looks like many of your fans, you defend her accuser. Who said that her brother was ‘the most patient, gentle, selfless man I know’. While you are struggling to breathe. The judge himself said ‘you ruined that girl.’ One who at 13 had to bear the burden of testifying against her own mother’s husband.

I don’t blame Minaj for her brother’s depravity, but I do hold her accountable for not being the ally that girl, and many more like her need. Minaj herself talks about her brother saving and protecting her in an abusive household. But when given the chance to do the same, she didn’t reciprocate.

Say what you will about Nicki and her brother. Ok, but then she went on to marry convicted sex offender Kenneth Petty. Who was convicted and spent four years in prison for attempted rape of his 16 year old girlfriend. Nicki’s defense? They were in a relationship. That doesn’t negate the trauma or his actions. Dating someone doesn’t entitle you to them. No means NO! Period!

Minaj is an icon to many young girls in the culture and the community. That she went on to marry Petty and her refusal to acknowledge, address or empathize with the suffering of both Petty’s and Maraj’s victims says a lot. Though Petty’s conviction for the attempted rape of Jennifer Hough is decades old, his refusal to register as a sex offender in California after being granted permission to move there from New York, brought Hough into a spotlight she wasn’t seeking.

Attempted rape can be just as damaging mentally and emotionally as the act itself. When Petty was engaging in plea talks, Hough asked for it to be rejected. Saying that Petty ‘has no rehabilitative characteristics. Petty is a criminal.’

Currently suing the Petty’s for harassment, Hough has been the victim of threats and harassment. Nicki and her husband reportedly offered her and her family $500K to say the rape never happened. Hough refused. According to Hough she talked to Minaj and told her ‘I need you to know woman to woman that this happened.’ After that, the threats intensified. Lawyers showed up on Hough’s doorstep on behalf of Minaj and Petty. She moved soon after out of fear for her safety. Her fear is warranted. Kenneth Petty was convicted almost a decade later and served seven years in prison for the murder of Lamont Robinson. Petty pulled up and shot him three times in a public space. Robinson identified Petty in a lineup just before he died in the hospital.

Minaj has also aligned herself with convicted rapper Tekashi 6ix9. Who pled guilty in 2015 of use of a child in a sexual performance after it was video taped, revealed and shared on social media his sexual encounter with a 13 year old girl.

They made a hit song together. And Tekashi’s punishment for his crime was to get his GED, two years of mental health treatment and a promise not to break the law for two years. More help for the predator than the victim.

Nicki Minaj isn’t the problem, but a magnification of it. A representation of the stigma and shame that comes with being a woman of color assaulted in America.

For every report, there are 15 others who don’t. Internalizing the pain and the shame from a community that puts the whole against the individual. 20% of Black women are rape survivors and 25% are sexually abused. But while a little less than 50% of white women report sexual assaults, less than 20% of Black women do. And more than three quarters of black female sexual assault victims, know their perpetrator.

Torn between betraying their community and getting the justice and help they deserve, Black women carry a burden the world doesn’t understand. Nicki Minaj’s inability and refusal to acknowledge that is damaging in so many ways.

In the grand scheme of things, I’m no one. But Nicki Minaj is someone. And there are millions of girls around the world looking to her for representation and validation. She had, she has, a chance to stand up and speak up for all those girls who are in the same situation that her brother’s victim was. And is. Put the ego aside and be a real and true advocate for all those who need their voices heard.