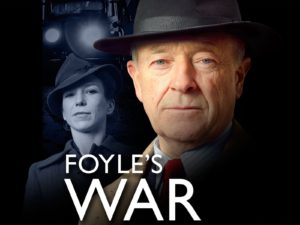 We do love a war. To be precise, we love a war we won.

The other kind are not so appealing so when ITV came up with a mystery period drama created by Anthony Horowitz, there was nothing about it which was likely to be a losing piece of drama as it covered the glorious period of 1939 – 1945, to wit the Second World War.

Casting Michael Kitchen as the eponymous hero, Detective Chief Inspector Christopher Foyle who has a son serving in the Air Force meant the acting heft matched the seriousness of the piece. Added in was the beauty of the deliciously named Honeysuckle Weeks, whose sister is starring in the Magnum PI reboot, and all we needed was a side kick to connect us with the times in which it was set. Perhaps the real genius was a character who was unable to fight, invalided from a previous conflict, where he lost a leg but with the same desire to serve his country. Like many of our veterans of the Falklands, the Gulf and more recent conflicts in Afghanistan and Iraq, we had Anthony Howell join and make the triumvirate complete.

They almost all stayed the course and managed to contribute to the whole 8 series of 28 episodes. Running for 13 years it spanned the war and afterwards as the series tackled the new dawn of post war Britain with the same characters and the same morality but slightly differing expectations – form the characters and us, the audience.

Its beginning, to take on the role of replacing the long running love of the TV crime crowd, Morse which had come to an end in 2000, with the death of its hero – Chief Inspector Endeavour Morse was a daunting slot likely to be too big for many new series. But Kitchen et al did a fantastic job of doing just that, managing to achieve just 5 episodes shy of Morse’s 33 episode run; Foyle’s War was a treat.
But of course, it was going be as the pedigree inherited from the classic British crime series Midsomer Murders saw the writer of that became the originator of Foyle’s War.
It did suffer a wobble when in 2007, it got cancelled but was then revived for 2008 for a further three and ending for good in 2015.

The premise was that Foyle, played by Kitchen, a widower is a frequently underestimated detective pitched into the murky world of crime under the wartime privations we all knew well enough about. The war was responsible for sufficient concern in the field that home duties were severely under pressure. Black market goods, profiteering and plain old crime were thriving whilst the soldiers and armed forces were in the pursuit of an allied victory. Foyle was a tenacious man who often fell foul of those in authority often wishing he would pursue things less enthusiastically. But his moral compass was set and assisted by his driver, Samantha “Sam” Stewart, played by Weeks and Detective Sergeant Paul Milner, played by Howell, this series placed them all at home in a time of desperate need. Then it ended and Foyle became involved in the aftermath of World War Two – the cold war and espionage for MI5.

Each episode was feature length with a 90 minute run time, was self-contained though some running narratives ensured we kept up tot date with Foyle’s son, Milner’s troubles at home and the romantic entanglements of Sam Stewart.

For such a marquee series, the cancelation came as quite a shock and the viewing figures for the final two episodes showed that the series was far from complete. The final three series were swiftly commissioned, and the stories restarted. With the “final” episode having had the end of the War already declared it meant that there needed to be new focus and that came with Foyle leaving his Hastings police office and becoming part of the wider world – namely – London. We also lost DS Milner and Stewart, now Wainwright into lesser roles. The major focus became the principal and eponymous character, and his character became the major focus of the final three series – especially in the new world in which he found himself.

His relationship with the other two principals, by the end of the fifth series was of a fantastically fatherly figure role which he used well, and thereafter not having the same role meant that whilst the narrative developed, I felt it lost a little focus. Milner got reproached often and Foyle’s exasperation with Stewart was palpable. By the end of the eight series, Foyle has offered to resign so often that it was a shock when it all ended! But ended it did. It left a legacy of a wartime drama that dealt with the home front in a far more realistic manner than we had been used to in the likes of comedies such as Dad’s Army and ‘Allo ‘Allo. We always eulogised the home front, the brave men at the front were backed to the hilt by a loyal band of people uncorrupted until the arrival of American airmen with their bubble-gum, silk stockings and fancy ways. The major storyline in British drama thereafter about the war tended to be when a US airman was found to have fathered a child. Here we got the gritty murders and thefts, though in a stylish production which glamourised the authority figure, incorruptible by authority itself. Power did not disrupt Foyle’s sense of right and wrong. It powered his sense of justice, and it was that prevailing morality which made us tune in regularly till the end.