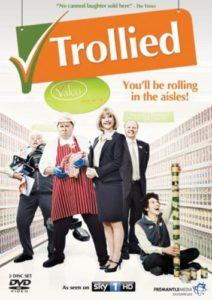 Produced by SKY TV, this niche program hit two very interesting ideas on the head at once. Firstly, it was all about the eccentricities of the English. I am being very specific; it was all about the English. That is not say that many of the characters would not have equivalents in other cultures, of course they would, but this was a quintessentially English phenomenon.
Secondly it was based in the one place so many of us spend so much of our time – a supermarket.

Created by a triumvirate of Anne Marie O’Connor, Paul Doolan and Ash Atalie, Trollied ran for 7 series, 5 specials and 71 episodes from 2011 to 2018 and it was utterly fabulous. A comedy that was all about a fictional supermarket, Valco, the comedy started with the opening credits. The premise for the opening credits was getting staff to be part of a television advertising campaign for Valco. So even before we started to watch the program, we had a flavor of their tricks and traits. It was just a shorthand for the brilliantly imagined set pieces to follow.

Romances and rivalries drove the narrative as we had the beauty of characterisation in all its glory gave us weekly set pieces and narrative arcs based upon their foibles and faults. Who can forget Julie Cook, the hapless assistant manager who joined the company straight after school, played by Jane Horrocks who was so obviously in love with accident prone store manager, Gavin Strong, played by Jason Watkins. She could never bring herself to tell him and he in turn, could never see until he twigged and she just had to leave – to Widnes… (Told you it was English!)

There was the head butcher, Andy Richmond, played by Mark Addy, who left to go to Scarborough when reunited with his one love. This encounter over the counter, came following episode after episode of him failing to prove he was a “ladies’ man”. The real ladies’ man was his assistant Kieran, played by Nick Blood who was best mates with Katie, played by Chanel Cresswell. Secretly Kieran was wishing it was more than just mates; until it was and they swanned off up an aisle to their future… and she came back as it turned out not to be the dream it promised and Katie became Gavin’s Assistant Store Manager.

Colin, played to perfection by Carl Rice was part of another double act alongside Lisa, played by Beverly Rudd. Two characters unlikely to find love, they find it with each other – altogether far too frequently and at work. Lisa and Colin hate working there but can never leave. They work as little as possible and avoid anything strenuous – like work. Lisa, as a check out operator finds increasingly crafty ways of avoiding doing much and Colin finds more excuses than a Trump supporter for continued failure to do anything.

Other double acts included Margaret, played poignantly by Rita May, became an unlikely partner to wanna be doctor and frustrated chemist, Brian played by Stephen Tomkinson. Her inability to understand things alongside his arrogance were perfectly pitched.

Sue Benson, played by Lorraine Cheshire and Linda Stubings, played by Faye McKeever were best friends at the customer services till, even when hapless Neville played by Dominic Coleman broke them up. Neville was the worst catch in the romantic sea whilst Linda was one of the best. It was inevitable they would find each other!

There were so many others over the 7 series from the gay store detective who was more insecurity guard than a secure one and it was their eccentricities played out as trinkets that made this a much watch. Or Leighton, the boy with a hard working ethos and naïve approach to everything, Lorraine who comes and sweeps Gavin off his feet played by Stephanie Beachem and Ray on the fish counter played by Adeel Akhtar or the first time I saw Aisling Bea on TV as the outlandishly dumb Charlie O’Connor!

There were so many others and guest appearances from people who at the time in the UK didn’t need the exposure, because it felt like the program in which to be seen!

Critically it was not as enthusiastically welcomed as it was in our house but no matter, not everyone can have perfect taste like us!

In the US, I believe it has even got an equivalent. Perhaps hoping that if The Office could translate, this could too, PBS affiliates have Superstore.

But for me, the original stands the test of time, not that I have seen much of it since it stopped filming and we slavishly scheduled ourselves round the TV as if it was a Game of Thrones preview…

A satellite original that proved the new dawn of broadcasting could compete with the standards of the past – what joy!