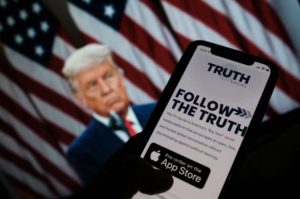 This article is going to seem like a parody piece on the Onion but I promise you all this 100% not fake news.

In the same week former President Donald Trump announced he would be launching a new social media site in early 2022 it’s been confirmed that the site’s test beta version was hacked just a short time after. The site — called TRUTH Social — was flooded by online hackers who created fake accounts of Trump, former VP Mike Pence, QAnon wannabe Ron Watkins, and others in the same circle and caliber of people.

The fact that the new social media site is called TRUTH Social is absolutely hysterical considering the man launching it was confirmed to have spread over 25,000 lies while during his one-term, double impeachment presidency. It also really does have the “truth” part of its name capitalized so we know Trump definitely came up with the idea.

Regardless of the amazing pranksters who did God’s work for us by hacking the network, there’s a few other reasons why the site is doomed to fail. For starters, Twitter already exists. TRUTH Social is literally identical in its format style as the already well used social media site. Besides the fact that the layout is a copycat — which makes sense because Trump isn’t known for his original ideas — it’s also starting completely from scratch. While Trump had 88 million followers on Twitter, it will be very difficult for him to achieve that same kind of following on a site only his base will join as there’s less than 88 million of them.

Another limitation to the network is that Parler already exists. Do we see the trend here? But in all seriousness, the conservative social media world is already a crowded area and isn’t exactly thriving besides FaceBook. Since Trump’s spiral into oblivion after being banned from the entire Internet basically, Parler started to teeter off. In December 2020 the app had 517,000 downloads, but data from July 2021 shows a sharp decline to only 11,000 downloads. We also can’t forget about the other Twitter duplicate site started by Trump’s associate Jason Miller launched called Gettr. Declared a “mess” by TechCrunch, Gettr also experienced similar issues to TRUTH Social when hackers were able to publish email addresses for its 85,000 online users.

Lastly, let’s be realistic about one thing — Donald Trump is not the president anymore and his “executive privilege” has vanished. While he is still prominent in the Republican Party and conservative social realms, the overall fascination and coverage on him has declined drastically since January. Most of the only news coverage focused on Trump, his family, and inner circle is over his mounting legal woes. We also can’t forget how in June he had launched his own presidential blog that was shut down in 28 days due to poor viewership.

What I’m trying to say here is that everything Trump touches dies and this is just another embarrassing business failure he can add to his long resume of bankruptcies and closures. If anything it gives us a pretty obvious answer as to how come Russian and Chinese hackers were able to easily hack into our own government and private companies systems so often under his presidency.

This is clearly Trump’s way of trying to show Big Tech he doesn’t need them to let him on their sites even though he keeps suing to get his accounts back. No matter how many copycat clones Trump or his chicken head homies try to create will help him get more followers than anyone who is still allowed to have their Twitter accounts. Even the bot accounts with names like @Patriot162021 will always have more followers than a man that once held the most powerful office in the world.