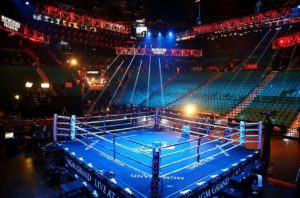 From the UK – biggest and most notable fight last week

Scotland has a new world champion; a new two-time world champion who has regained her belt. Last Friday the 5th of November, the WBA and IBO belts at super welterweight went to Hannah Rankin who beat Maria Lindberg on points. It was Rankin’s 6th world title fight in 16 fights and she has now won 2 of them! There are a couple of other world title belts available as they are either vacant (IBF) or with an interim champion in place (WBC) … Claressa Shields holds the WBO and Ring Magazine belts… I do believe she is busy on other missions… Rankin could be in line to clean up!

On Saturday the 6th of November, in Liverpool the 8 man super lightweight BOXXER contest returned and made its debut on Sky Sports. There was a lot riding on this tournament as it built on the previous success of the Prize Fighter tournament that had also been on Sky but had a different front man, behind it – if that is possible!

It did not disappoint. Each fight was three rounds. If you won your first one, you were in a second fight, and if you won that, you made the final. You needed three sets of three explosive rounds. If you lost the first round in any of those fights, you played catch up. If you had too tough an early fight you could end up unable to win your next fight. Tactics were evident until they went out the window because somebody had the audacity to punch you in the face!

The man who won was an amateur star and undefeated in the pro game. Supremely confident going into the contest, Cori Gibbs beat Sean Dodds in his first fight with a split decision – could have been given either way – was well up against Lee Appleyard in the semi-final and was well ahead of local lad Tom Farrell in the final – though only got it on another split decision! Special mention has to go to the rest of the fighters – Kane Gardner, Nathan Bennet, Levi Kinsonia and Ben Fields who gave us a cracking night of entertainment.

On the same night that Scotland were gaining a new world champion, on the very same Friday the 5th of November but in Las Vegas the WBO/IBF female super featherweight battle between Mikaela Mayer and Malva Hamadouche ended with Mayer winning by unanimous decision. Hamadouche made a fight of it though the judges did not quite see it that way with wide margins across all three scorecards. The UK’s own Terri Harper holds the WBC belt, and a unification cannot be that far off though Harper has a defence this week … her 5th of her IBO belt and 3rd of the WBC title.

The biggest name to make it across the pond to our ears was that pesky Mexican who keeps on winning when on Saturday the 6th of November in Las Vegas, for the WBC/WBA/WBA/IBF super middleweight titles Saul “Canelo” Alvarez stopped Caleb Plant in the 11th round in a classic performance. It was a great fight; a tremendous end and a classic example of how really great boxing is classy when it is won by the classy guy. Plant sold the fight well and competed but there are few who can match Canelo.

This Saturday the 13th of November we have what for many is quite a surprising world title fight between Kiko Martinez and Kid Galahad in Sheffield for DAZN as Galahad is defending his IBF title for the very first time. Martinez is surely past his best and this looks like a retirement pound being spent on the game and very tough Spaniard. Galahad should win comfortably with bigger challenges to come.

As noted earlier this Saturday the 13th of November we have another female world title fight. The WBC and IBO super featherweight title is on the line between Terri Harper and Alycia Baumgardner… We therefore have another British world champion, with another chance to shine, on the Galahad/Martinez world championship card. What could possibly go wrong? Harper needs to be (S)Harper for the duration of this contest as Baumgardner is a former Golden Gloves finalist and has only one loss on her record. I still think this is likely to be loss number two.

Meanwhile as we time hop again, and go back to Friday the 12th of November, off we pop to Denmark, for the WBO female bantamweight title fight between Dina Thorslund and Zulina Munoz. We did have a UK based bantamweight champion who lost her crown very recently. Perhaps rather than trying to get her title back, Shannon Courteney might have a chance to offer a bigger platform for the winner of this fight in the UK?

Finally, as we hear and get excited by it, on Friday the 12th of November, in the Californian sunshine the WBO intercontinental middleweight belt is in the ring and Jaime Munguia and Gabriel Rosado shall fight over it! We all think that Munguia will win… won’t he?

We also have Fightzone in Aberdeen, which includes the welterweight WBC international silver title fight between Dean Sutherland and Michael Esposito, Queensberry and their next generation in York Hall, Shakan Pitters takes on Reece Cartwright for the WBC international light heavyweight belt in Coventry and on the DAZN bill in Sheffield there is the EBU cruiserweight belt has Chris Billiam-Smith in the ring to win it against Dylan Bregeon!

It is a long time since a debut attracted such interest but given the number of tremendous female fighters making their mark recently, the darling of the amateur scene, and sister of Daniel, Caroline Dubois, shall be introduced to the professional game in the iconic York Hall and alle yes are on her arrival.

Glasgow has not one but two cards in two hotels, on Friday. The one that caught my eye is at the Radisson Blu where The Title Taker is back with Scott Allen ready to take on Waqas Mohammed.

Super lightweight semi final two between Kali Reis and Jessica Camara for the WBO, IBO and the vacant WBO titles. The winner goes in against Chantelle Cameron for all the belts!

Over the weekend we have a plethora of fights for the purists and the casual fans with cards in Worksop, Swindon and Rotherham in the UK but the big fights are in the US – we have the WBA/IBF super bantamweight title fight between Murodjon Akhmadaliev, the WBC flyweight battle between Julio Cesar Martinez and McWilliams Arroyo, and the middleweight WBO fight between Demetrius Andrade and Jason Quigley for the WBO title – all in New Hampshire. We also have the WBO Asia Pacific and WBO Global title on the line in Sydney, Australia between Tim Tszyu and Takeshi Inoue.