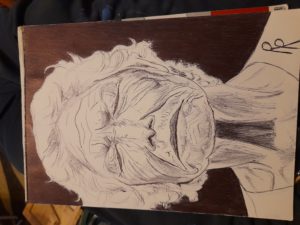 Whether I’m painting or writing I usually have something on in the background. It might be music, but generally it’s a film/movie or TV series. As a kid growing up my sister had the telly on 24 hours a day. She was immobile for a big chunk of her life, and I think it was both a distraction and a means of control.

Now, I find silence unsettling, so I follow the same patterns. However, I never truly watch what’s on. Most of the time I’m absorbed in what I’m doing and have little clue what is happening onscreen – at least not in any detail.

Having said this, sometimes a show grabs my attention and I find myself enthralled or appalled and that makes me watch more closely. I stumbled across just such a series this past couple of weeks. A feature of this – once I’m invested – is that I have to see it through no matter what.

This particular show grabbed my attention because it was gritty, focused on an interesting subculture, and had a fascinating hero’s journey. A man trapped by false loyalties and wrestling with dark family secrets. There was even a nebulous spiritual thread that only made sense in the final episode. Who could ask for more? Brilliant!

Well, brilliant for a couple of seasons anyway, and then things began to unravel spectacularly. For one thing each episode had an absurd body count, death after death after monstrous death. The violence was so prevalent that it became almost comedic, and the plots so labyrinthine that their paths horribly, ridiculously predictable.

Despite great actors, nothing could rescue the show from superficiality. Someone would kill another’s loved ones, and, as if by magic, all would end well. Forgiveness! Individuals would see their lifelong friends gunned down and recover within minutes. A lifelong partners demise would mean a few token tears… On and on and on.
Although there was always a healthy dose of vengeance to be had! This show was surely made to underline Gandhi’s message about an eye for an eye making the whole world blind.

What made me saddest was that I truly wanted to believe in the hero and his journey. I wanted to feel for him, empathise with him, but the direction of the writing made it impossible. Too many horrors, too much unthinking violence. Ultimately, I wanted him to be caught. He was only a little beyond a violent thug.

One of the leading female characters was so repulsive that she felt like a Bond villain. If I’m reading the writer’s intentions correctly, you were supposed to identify with her as a matriarchal figure enmeshed in her own troubled past – that’s what a reviewer confirmed for me anyway – but it couldn’t be sustained. Whatever their intentions she came across as self-serving and irredeemable.

Having said all this I still watched to the bitter end albeit with some strategic fast forwarding. Why? I told you! I invest. But more importantly because I wanted to see whether the pantomime dame matriarch would continue to get away with it all. Well, that plus I wanted to see how the hero’s life would finally play out. In that respect it didn’t disappoint, it was suitably preposterous.

The worst thing about engaging so closely with a show like this is the strain it places on your credulity as a viewer. When you’ve seen the same characters say the same thing hundreds of times, when you’ve watched them react in unbelievable ways a similar number of times you simply can’t remain positively credulous. It’s not the fault of the actors, it’s what they are given to work with.

What a relief it was to find there wouldn’t be another series. I will not categorically say I wouldn’t have watched it, but in this case, I am not certain that I could.

Cringeworthy or bingeworthy? Sometimes things can be both.