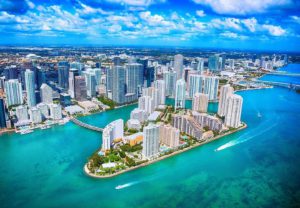 It would be easy for a person to ask how I can not only make that statement but how am I audacious enough to title this article with those words. And the answer, of course, is both simple and factual: because both statements are true.

Let us discuss those two topics in reverse order, though.

Although a number of the high pitched, shrieking, cackling, giggling hyenas on Miami’s local television stations, both English and Espanol have, mercifully, left the local scene and gone on to other venues to spew their juvenile, childish, inane, rat trap (and nothing but shameful) hooey, we are, here in Myamuh (as many of us long timers sometimes pronounce it, as the really early Miamians did) still laden and burdened with some of the worst broadcasters in the country.

And now that I have your attention, I’m certain you are ready to ask—if not demand—factuality to back that statement up, and I am pleased to offer same to you.

Let us begin, though, with the past, when this city was blessed with real and true news people and broadcasters with names such as Ralph Renick; John Hambrick; Wayne Fariss; Del Frank; Noah Tyler, and, to a lesser extent although so much better than the shrill, high pitched chayahs (Yiddishism meaning annoying, giggling, nauseating anything but, in this case, actual or legitimate news or sports people) a female by the name of Ann Bishop. Along with them we had great weather people, especially Bob (“Weaver the Weatherman”) Weaver on Channel Four, until the new, young, know nothing know-it-alls who became the program directors (who actually knew less than nothing) pushed him and Mr. Renick and others off the air) although, truth be told—and that is what I am known for—most of the weather people, male or female, on the various stations today are neither “too bad” nor are they offensive, so this really is not an indictment of them

Forgetting the past, and the parade of clowns, bozos, yahoos, yutzes, nitwits and nobodies who we were and currently are and have been afflicted with for so many years, we are still burdened with too many of them, particularly she of the high pitched, screechy, annoying voice on Channel Seven who ends every news cast with (I have the bucket ready so I can puke into it every time she says this) “ciao, ciao, ciao!”

“Ciao, ciao, ciao?!!” Goddam, son, that is sickening, especially when we were so blessed for so many years to have none other than the great Ralph Renick (yes, a real and true personal friend, that disclaimer, I feel, being necessary) who would sign off at the end of every newscast with “Good night and may the good news be yours.” That, boys and goys, was a great closing and the epitome of class, which Ralph had an abundance of.

Are these Miami people who blabber out the sports actual broadcasters or nothing more than shills for the teams?

That nauseating and disgusting crap coming from Jim Berry or the other nobodies using the words “Your Miami Heat” or “Your Miami Dolphins” or “Your whatever the hockey team is called” is shameful at best and beyond disgusting at worst. And, please, don’t give me that, “well, they want to build up team spirit” GARBAGE. NONSENSE. HORSE FEATHERS. That is NOT their job, unless they are being paid to shill for the teams. And when they spout out that crap, all they are is shills, and nothing more and by doing that they have lost—which every one of them who uses those terms has—even the barest hint of legitimacy.

Think about it: None of those teams are “ours.” The Heat is Mickey Arison’s Heat, the Dolphins are Steve Ross’s Dolphins and the baseball and hockey and soccer teams are the property of their owners but they sure as hell aren’t “Your Miami whichever team it is they are shilling for,” and will never be until the owners distribute shares of stock to the entire city. Then—and only then—can we do what only one city in professional sports has the actual and ethical right to do, and that is, of course, refer to the team as “theirs,” as in “Your Green Bay Packers,” the only pro sports team named for the City which boasts said team’s ownership. Otherwise using that term is both shameful and juvenile and if the station owners had the cahonies (which they don’t, because sucking up to the team owners is more important to them than engaging in real and true professional broadcasting, which using the term noted above is anything but) they would put a stop to the use of that or those terms (as we would say in hes-pan-yole) immediatamente.

Our transition to the restaurants and how hideously poor the training is (if it exists at all) in most of them is two words, “you guys.” But before we move on to the anything in this town but hospitality establishments (most of the owners wouldn’t know what that word means or meant if it jumped up and kicked them in their collective fannies) we need to take one last legitimate shot at the broadcasters because every time one of them says “back to you guys” it is nothing other than rude and crude and if they knew what professionalism was or meant, they would never refer to their colleagues and fellow broadcasters as “you guys,” especially when many of them are of the female persuasion.

Now, on to the restaurants and clubs.

What I want our readers to understand is that I know more than “a little bit” about the food and beverage/club and restaurant/catering and hotel businesses, with three of my four degrees being in hospitality management, including my bachelor’s degree from Cornell University’s School of Hotel Administration and one of my two and three-quarters master’s degrees being from F I U’s Hospitality School. In addition to that, I spent thirty years running some of the finest restaurants and clubs in the history of Miami and New York, including, among others, Lloyd’s of the Maison Grande, Bernard’s in the Carriage House, the Piccadilly Hearth on Decorator’s Row, the famous New York Gaslight Club (Playboy came out of Gaslight by the way), five years doing the catering with the late, great Lloyd Apple at Epicure Market, and as GM at both Playboy Club Miami (I am the only living former Playboy Club Miami general manager) and Miami Shores Country Club.

Although I have been teaching health services administration and history at Barry University for many years, I first spent twelve years at St. Thomas University and then five years at that hell hole, that horror show, that poster child for faculty unions, Johnny Whales (mercifully, they are “outta’ here,” having decided to close and sell the North Miami and Denver campuses) teaching every area of hospitality management at those two schools for seventeen years.

My indictments of local restaurants is lengthy, ranging from dirty, filthy, disgusting kitchens and dining premises to innumerable legal violations, as well as obnoxious anything but hosts and managers, who wouldn’t know how to manage a food and beverage operation if their lives depended on them doing so, but for our purposes today, I hone in on the two word insult to their guests noted above. “you guys.”

I come from a background of having learned elegance and refinement in the business and what I see and hear today in too many places simply turns my stomach.

When I took over Miami Shores Country Club in 1985, we had a hostess by the name of Darlene who literally hung over the podium at the entrance to the dining room like a vulture, and instead of greeting members and their guests warmly and by name would say, “Can I help you?”

“Can I help you?” Of course you can help me, you idiot, what the hell do you think I’m here for, to find out who the decorator was? And so I took Darlene aside almost immediately and told her that, from that day on, she was to greet our members and their guests with “good afternoon” or “good evening, and welcome to the club.”

Talking to her was like talking to a piece of furniture, and, finally, after writing her up twice, I had no choice but to terminate her, which I did, replacing her with a wonderful young man by the name of Mohammed (“Mo”) who was both more than willing and happy to greet our members as I wanted them to be greeted.

Now, though, the real and current beef. (OK, one more besides this one, but that for another column!)

We walk into Outback and many other places and instead of being warmly greeted with “Good evening” or “Welcome” or “Nice to see you, folks,” the greeting is “How you guys doin’?” And my standard reply is “How you guys doin’? Do these two beautiful women (usually my still stunningly beautiful wife, that after now 45 years of marriage) and the wives or girl friends as part of at least one other couple we may be with) look like ‘guys?’” And the non-genius behind the podium, who has obviously had no training at all, looks stunned as I continue with (if it is a female “hostess,” which they are anything but, as they are barely greeters) “how would you like it if I walked in here and said, ‘how you babes doin’?’ or ‘how you broads doin’?’ (that, of course, a Sinatra era Rat Pack term, so the “kids” have no idea what it means until I explain). Of course, if it is a male, I substitute the words “punks” or “broz” and then I explain that the proper way to greet your guests is with “good evening, folks, and welcome.” Or, “good afternoon or good evening, nice to have you ladies and gentlemen with us.”

The facial expressions range from bewilderment to complete stupidity, but, little by little they do seem to catch on, and what most of the restaurants in this town, so poorly run, so poorly managed, so poorly operated and so vilely unclean, need to do is to bring me in, not just to teach them service and cleanliness but to explain that, in the service business, we don’t have customers or clients, we only have guests. (Damn, that word really is a foreign term—having nothing to do with language or linguistics—in this town.)

So there you have it, folks (NOT “you guys!”), and we part company by wishing you a wonderful and happy holiday season, all. Be—and stay—well and, above all, please stay safe.