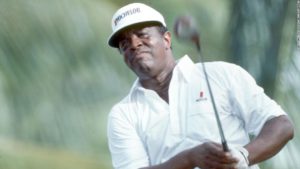 Lee Elder, the first Black golfer to compete in Masters, has passed away on November 8, 2021, in Escondido, California. No cause of death had been disclosed. However, it was announced that Elder had been in poor health for some time. Elder was 87.

Prior to his life in the PGA Tour, a young Elder took jobs in pro shops and was a caddy, which is where he developed his skills by watching his clients and playing when an opportunity arose. In 1959, Elder was drafted into the Army, and was sent to Fort Lewis, Washington. Elder was under the command of Colonel John Gleaster, an avid golfer. Gleaster put Elder in a special services unit, allowing him to play golf on a steady basis. He was discharged from the Army in 1961 and joined the Union Golf Association, where he won 18 of 22 consecutive tournaments.

In 1974, earned his first win on the PGA Tour at the Monsanto Open. Elder was invited to enter the Masters Tournament in Augusta, Georgia. This marked the first time that an African American had qualified for the Masters since the tournament began in 1934. In 1979, he became the first African American to qualify for play in the Ryder Cup. In 1984, at the age of 50, Elder joined the Senior PGA Tour.

Elder also won PGA tournaments including the Houston Open in 1976, the Greater Milwaukee Open in 1978, the American Express Westchester Classic in 1978. He also won 8 tournaments for the Senior PGA Tour.

Elder was a big advocate on the fight against racism. He and his then wife, Harper, set up the Lee Elder Scholarship in 1974. This fund was developed to offer money to aid low-income young men ad women seeking money for college. In 1990 he spoke against country clubs that still excluded Black golfers from membership. Elder promoted Summer Youth Golf Development Programs, and raised money for the United Negro College Fund, and served on the advisory boards for Goodwill Industries.

Elder’s life on and off the course was nothing short of extraordinary, and truly inspiring.

Ringside Report sends our condolences to Lee Elder’s family during their time of grief.