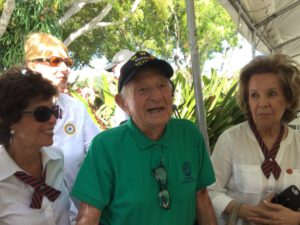 I often wonder if a goodly number of people feel the same way as I do when such as sports commentators, in the feeble-mindedness of their talking head frenzies, keep referring to somebody who caught a long pass or hit a home run or dunked five baskets in a row, or put three pucks into the net in one game as “a hero,” cause folks, those non-geniuses don’t have the slightest idea—not the slightest—of what a real and true hero is, or why their use of that term because some person is a good athlete is so annoying/repugnant/revolting to those of us (and I know there are many readers out there who qualify as and are part of the collective “us!”) who either know personally or know, in truth, fact and reality, what a real and true hero is, even without knowing a person who deserves that accolade in actuality and reality.

There are, according to the U.S. Department of Veterans Affairs, of the multi-millions (16 million plus) of men and women who served in World War Two, as of February third of this year, approximately only 300,000 Americans remain alive who served in that horrific conflict, but that number is dwindling fast. With much of the “Greatest Generation” now in their 90s, hundreds of those veterans are dying every day. Fortunately, one of those great individuals, who earned and deserves the title “American hero” is here, very much active and alive at the age of 98 ½ years young, right here in and on the Biscayne Corridor.

Bernard (“Barney”) Mayrsohn was born in Brooklyn, New York in 1923, but with the handicap of, for whatever reason and however it happened, coming out of the womb of his dear mother with a broken shoulder, which makes his service to this country even more deserving of recognition.

As did his older brother (and as his younger brother as well as his wife would) Barney went to Cornell University, in Ithaca, enrolling there in the fall of 1941. Soon after America entered the war, on December 7, 1941, Barney went to the recruiting station on State Street in Ithaca to enlist but was, due to the broken shoulder, summarily rejected. That, however, did not deter his determination to be part of the war effort, and several month later, at another recruiting office, he got through the various tests without a problem and was accepted for service.

However, several days later it was time for the swearing-in ceremony, and Barney knew he couldn’t raise his right hand as required at that event so when the time came, and the command, “raise your right hand” was given Barney suddenly and conveniently had “an itch” so with his right hand he reached behind his back and scratched his tush (or “toosh,” if the reader prefers, in either case referring to the derriere) while raising his left hand and taking the oath, which the officer administering that solemn promise apparently never noticed, and Barney was “in.”

He was called a few months later and went for training in and with the U. S. Army Air Corps, later the Army Air Force, and, finally, the U. S. Air Force as a separate unit of the military, no longer a department of the Army. That training, as it did with more than 60% of those going into that particular service, was conducted on a little island on the east side of Biscayne Bay, known then and now as Miami Beach.

Eventually, after training in several locations, including near Indianapolis, Barney and many of his compatriots were advised that the Infantry (those fellows who carried rifles and were usually at the forefront of the various battles in Europe and the Pacific) was short of men and that thousands of Air Corps people were being transferred over and would become ground soldiers.

The Barney story is so fascinating—if not close to unbelievable—that it is told in a biography—“From Brooklyn to the Battle of the Bulge and on to Building an International Business: The Incredible Story of Bernard (Barney) Mayrsohn, published several years ago by Marc-Martin Publishing of Hallandale Beach and available from them or on-line through various outlets. But while it is a book-length and totally true story, the “blood and guts” part is what not only needs to be re-told here, but is what is not only as incredible as it is, but is what made Barney the hero that he still is.

Arriving in Europe after D-Day as part of the 106th Division (“The Golden Lion”) and following some continuing training in England, the Division was sent to the French—Belgian border in October of 1944, where they were advised that they had nothing to worry about because the only German troops facing them were “old men and young boys.” As it turned out, of course, that wasn’t quite the way it happened. The 106th Division was, unhappily for them, right at the front line of the Battle of the Bulge.

The onslaught of the Germans, with their artillery and tanks and panzer units was horrific, and there is (one of many) a great scene in the movie, “Patton,” in which one of the general’s scouts come racing up on a motorcycle and stops in front of Patton’s jeeps, following which there is this exchange: “General, general,” the motorcyclist yells, to which Patton replies, “what is it”? And the cyclist says, “the Germans demanded General MacAuliffe’s surrender at Bastogne, Sir,” at which point Patton scowls and yell through the roar of engines, “well what did MacAuliffe say?!!” To which the scout yelled back, “He said, ‘nuts,’ Sir!”

Patton roared with laughter and yelled to his people, “Anybody that eloquent has got to be saved,” followed by one of his innumerable blasts of epithets as he bellowed to his commanders, “G-d it, get this column moving: those boys in the 106th are getting chewed to pieces.”

At that point in the movie, those words and the reference to the 106th Division were, to most viewers, meaningless, because, at the time, very few people knew what the 106th was, but we certainly do now, because that was Barney’s division, and when the Colonel, having no choice but to do so, surrendered them, two-thirds of the Division was dead or wounded, Barney being one of the latter.

Because he was wounded twice at the Battle of the Bulge, Barney received two Purple Hearts, but it was for his heroism that the Bronze Star for Bravery was bestowed upon him, and when the Brigadier General presented it to him, he said, quite clearly and as was recorded, “Barney, this is not right. This should have been a Silver Star.”

Barney should have had a Silver Star because, during the battle and after capture, he saved, by actual count, 20 or 21 lives, but the problem was that “only” nine of them were recorded and verified, but along with the Purple Hearts and the Bronze Star, Barney also received the coveted Combat Infantry Medal for his “resolute bravery under fire and his courage is combat against and implacable enemy.”

There are, as noted, 20 or 21 examples of Barney’s selfless heroism, but one not only stands out but is well worth sharing.

Until the close to starvation conditions under which the men had to live in Stalag 4B on the German—Polish border, Barney weighed about 150 pounds. One of his closest friends in the 106th was none other than Hal Taylor, a many who outweighed Barney by more than 50 pounds and who, thank to Barney’s courage and bravery in saving Taylor’s life, would go on to become the first President George Bush’s Secretary or Agriculture.

The winter of 1944-’45 was the coldest winter in European history and after the men were captured, the Germans, who were relatively poorly equipped in terms on winter weather clothing, began to strip the Americans of the overcoats and more, and in the case of Hal Taylor going so far as to remove his boots, leaving him to walk in the snow and on the frozen ground with only his long—sleeve t-shirt and his socks on in addition to his pants.

From the point of capture to the railhead, where “the boys” would board the Prisoner of War train which would take them to the camp in far eastern Germany, it was about a five and one-half mile walk, but after about half a mile, Taylor (as Barney recounted) “plopped himself down in the snow and when I told him to get up so we could keep moving he said to me, ‘Barney, my feet are frozen; I can’t go any further—you keep going and I will just lie here and freeze to death. Don’t worry about me—it will be painless.’”

Barney, a sweet-natured, empathetic, caring man, who was one of those who never used or uses a curse word, likes to say, “Seth does my cursing for me,” but that day in late December, 1944, after Hal gave up, Barney cursed.

He looked down at Taylor and said (and I quote) “F you, you will,” and in an incredible feat of nearly super-human strength (and this after being twice-wounded only days earlier) Barney reached down, grabbed his friend, pulled him up on his back and half-dragged him half-carried him the remaining five miles to the train.

While there is much, much more to the story, there isn’t enough space to “tell it all,” hence the repeat reference to Barney’s biography. And, best of all, which Covid did take a lot out of him, we (a group of several of us) see Barney almost every Friday for lunch, and, in closing, I must share this with our readers: he certainly isn’t as active and spry and agile as he was just a few years ago, but he retains his sense of humor and his wonderful with, and, frankly, and simply put, it is nothing short of a great honor not only to have been selected as a great man’s biographer but to continue to frequently spend time with a man who was and is a true and great American hero.