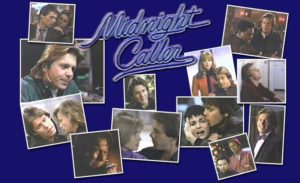 This fell, for me, into a similar vein as the UK TV show, Shoestring. Shoestring was a very British vehicle for a strange detective with a radio show, inviting people to call in if they needed help. Eddie Shoestring was never as suave and as sophisticated as Jack Killian. The night-time conversation in Midnight Caller was ever so much more atmospheric than a disheveled private eye trying his best, literally on a shoestring, in a British crime drama but it was there to compare, and both were pretty darn good, nonetheless.

Midnight Caller came along in the late 80’s, early 90’s and brought Gary Cole into our living rooms. Over 3 seasons and 61 episodes, he was our guide as the eponymous Killian; an ex-cop who was now taking late night calls for help. During the day – did the guy ever sleep? – he would go out on the mean streets and deliver justice and find the perpetrators.

What it captured for me was the phenomenon we got to know very well of radio phone in shows, which invited the general public to be the principal focus of its material. It encouraged disturbed and upset people to call in and then talked to them. A simple concept but revolutionary and something that the likes of Donald J Trump et all have, over time, benefited from, as well as hosts such as Howard Stern.
Here, however, radio talk shows were in their infancy, but also pretty well established as a medium.

The premise was simple, Jack Killian had left the police force after he had shot dead, accidentally, his partner. Having found himself languishing at the bottom of a bottle, Devon King, the owner of the local radio station, played by Wendy Kilbourne, offers him a job as “The Nighthawk” – an overnight talk show spot he would host. Killian took the role and the Nighthawk, listener by night and solver by day, began making the difference in lives looking for help.

Of course, his progress from being a former and uninvolved civilian to being an involved former cop, in problems that frequently ended with him being involved in solving crimes, being investigated by cops, brought conflict with his former colleagues; he was never really welcomed back into the fold.

This conflict was one of the many areas where it had its strengths. There were many beautifully written scripts in a 40 odd minute show that made their way across the screens and were pretty well ahead of their time.
We had hard hitting topics about issues still not getting the depth of concern they ought within the communities served by the radio station – child abuse, AIDS being amongst them. The episode around AIDS, which could be criticized in hindsight did lead to some decent discussion and an on air debate between health professionals about the subject. Though it may have been quite cheesy for its time, it added to the wherewithal of the American political firmament.

The character of Killian, with a torrid past which had infected his present had also to deal with a father never there in his backstory and siblings alongside whom he had a difficult relationship, adding depth to his character. The episodes could be rather cheesy though we got a lot of other substantive supporting roles, not least that of the station owner, Devon King. Of course, there was some sexual tension between them, but it never flourished and when Wendy Kilbourne left the show, being replaced by Lisa Eilbach, as Nicky Molloy, there had been the recognition of a need for gender balance. There was also a heavy reliance on the supporting roles bringing some of the problems to Killian. This offered depth and back story to characters that added to the strength of the show thanks to Dennis Dun as Billy Po, Mykel T. Williamson as Deacon Bridges, and Arthur Taxier as Lieutenant Carl Zymak

It aired in the UK through the BBC which was great because it delivered a massive audience though a scheduling move in the US is what killed it off. Losing an audience was always a challenge for US shows and it was one that Midnight Caller could not beat.

It was a shame and a pity because it gave us an insight into so much that was and still is America. It provided decent drama at a time when the dominant force for US TV was the Dallas/Dynasty soap operas making our lives feel like a distant part of the world. We could afford the power shoulders of the characters in Dallas/Dynasty but not the lifestyles. Midnight Caller had the gritty, the real and the simple telling of a story well told at its heart. As it left our schedules, it would have been replaced by another US show which was equally attractive to the British audience – as in nothing like what we lived during the day but plenty to fantasize over at night. It would have been more Dallas/Dynasty than Midnight Caller… and to finish, I can only, of course end with Killian’s own sign-off which was broadcast at the end of every episode, “Good night, America, wherever you are.”