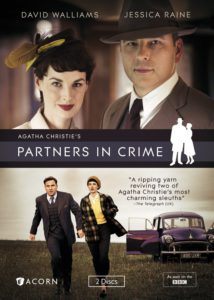 There are quite a few classic authors for whom the term classic fits within the English crime writing genre. We have Dorothy L Sayers, Ngaio Marsh and the doyen of them all – Agatha Christie.
She has even provided for us, within her own life, a mystery when in her early years of marriage she disappeared for a period of time leading to a nationwide hunt for her before she was found in a hotel. She never told anyone why she had disappeared. It led to a scandal and speculation at the time and forever since.

That she has provided the reading public with two of England’s most recognizable and iconic literary detectives – Hercule Poirot and Miss Marple – who have gone on to be as much for a byword for the criminal detective as Sherlock Holmes is testimony to her abilities . But her crimes were of a type, gentile and relatively speaking, less seedy than the grimy 20th century novels od Pulp Fiction fame where Marlowe, Dragnet or Johnny Dollar would spring surprises and solutions.

Aside from the two classic characters she was also responsible for an upper class duo who made their appearance in print before many a television executive wondered how they could translate them successfully into celluloid cash cows. This pair were privileged and just a little spoiled – not that Poirot did not epitomize each of these characteristics to excess – but the general population would struggle to identify and sympathise with Tommy and Tuppence Beresford.

The trick was to get an actor who was already associated with quirky off the wall characters and translate them from the comedy circuit into the challenge of making this couple – they were married – as characters to be watched rather than appeal as a pair of empathetic sleuths.

Step forward David Walliams, who by 2015, was an ever present on our screens in the UK and his turn in a single series of Partners in Crime was to see him take on the challenge. And he does so with some skill. It was never going to be one of his top ten performances simply because the origin material is quite scanty, but he managed to bring his own self to the part which filled out nicely. It was not, however, smooth. Sometimes, in an effort to be less of a star and more background than he was ever able to be, he became anonymous as opposed to characterful.

The premise was also quite simple – in two mysteries, based on Christie books from the 1920’s and 1940’s, The Secret Adversary and N or M? – Tommy, a money making disaster, a businessman without acumen but a glorious spy and a crime solver, falls into mysteries. His wife, Tuppence is a real treat of a woman with a wicked sense of humor and the daughter of a cleric – an Archdeacon no less – who is no housewife and refuses to be one. When an unexpected chance arrives to defend her country she jumps at it with both feet, taking hubby with her.

The two mysteries were updated in the 2015 version from when they were written – in the 1920’ and 1940’s when the major villains would have been Nazi Germany to the 1950’s and the Cold War were Stalin’s Russia were the major threat to democracy and world order. It worked pretty well and the adaptation managed to replicate the danger of the times and the insecurities we felt with the shadow of the Red Menace being just over the wall, in the East!

Connections with the murky world of espionage came through Major Anthony Carter, played by James Fleet who was Tommy’s uncle and head of a branch of British Military Intelligence and Albert Pemberton, played by Matthew Steer who was a teacher and part time agent for Carter. Tommy knew Pemberton from hospital when Pemberton was recovering from losing a hand when he was part of a bomb disposal unit. Pemberton was the technical guy called upon to be the “Q” to the duo.

It was partly Walliams himself, along with his collaborator – creatively speaking – who managed to convince Endor Productions and the BBC to bring these characters back to the small screen. Christie had provided plenty of material for the series as the Tuppences had been central to novels that stretched from the 1920’s right up to the 1970’s.

Unfortunately, the first series was as far as the BBC would go and it was not recommissioned. That was a shame as the reset of it to the 1950’s worked well, and it looked pretty decent. There was plenty to love and they brought something different to the genre. It was also the 125th Anniversary of Christie’s birth when the series was commissioned so resonance was high in the reasons for having it made.

Alongside Walliams as Tommy, Jessica Raine played Tuppence, managing the very fine line between sending it up and being serious. Between them they motored the thing along quite comfortably though their partnership worked as a couple of friends more than a seriously credible couple.

It was perhaps this lack of dramatic fizz that led to the champagne being put on ice as the couple with Soviet trouble triumphed but never returned to continue their fight against tyranny. Despite being a much less attractive set of sleuths than either Poirot or Marple, they were worthy of the series and perhaps even of a revisit. Perhaps this time, less of a star vehicle and more of an opportunity to make a star of someone would suit the storylines better.