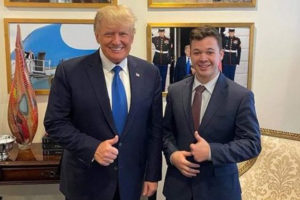 We are in shock.

In the UK, the walking along a road bearing arms is reserved legally for people who have a badge or a military occupation. Due to a number of crimes, and that IS what they are, we have banned guns except in exceptional circumstances.

The world has not stopped, the communities served by police officers have not broken down and lawlessness is at a level it has always been at.

People are people after all.

But the idea that a man, with an illegal firearm, should wander the streets, “in fear of his life” taking people down by killing them when there was little or no threat to his life, is unbelievable. That his actions be endorsed by the law enforcement agencies who have responsibility for the peace on your streets is incredible. To hear the verdict delivered which challenges the very authority of a collective norm that is very much under threat – law and order – is suddenly no longer either tough to believe nor too incredulous to credit.

This verdict does not embolden the rights of humanity. It does not serve the people. It does not enrich the opportunities for safety in any community.

It only emboldens, serves and provides opportunities for one section of society – the white power elite who seek to keep the rest of us in place.

The fact is that this “sweet kid” went out into the night armed and shot dead people in cold blood. Period.

In the UK we have a tremendous fear of the racist white power movements that train in secret camps in the US. We have had a number of television documentaries aired in the UK which expose these movements and find at times, that we are baffled that our shock and our appalled sensibilities are not shared by the majority of people in the US.
The absolution of Rittenhouse now lands in the same in tray for racists as the Greensboro acquittals in 1979, the 1978/79 acquittal of racists who were plotting to overthrow the US government, and the partial prosecution of Timothy McVeigh – I could go on…

There is a type – the “lone wolf terrorist” that seeks to minimize the effect of the perpetrators of extreme violence – they act alone, it is their mentally instability at fault, we have no way of keeping ourselves safe against the unknown who could emerge at any time with automatic weapons etc, etc, etc… The lone wolf, emerges from a pack and it is that pack who just got a free pass and a propaganda coup.

We believe that militias are commonplace in the US. We see them as the means through which many on the extreme right exercise their rights to bear arms and be terrible.
I fear for you all. I truly do.

With their grip upon the social media platforms where they can spread their hate with impunity who knows who the next Rittenhouse shall be. They shall already be plotting, already be scheming and already be more than halfway to murdering somebody.

The sight of this little kid hearing the verdict, struggling to stand and then moments after striding out with purpose after the verdict was truly a terrifying sight. He was clearly just a child in a man’s body who had seen sufficient Hollywood movies to think it was real life. To escape the justice system makes him a vigilante with a cause and endorsements. I have little doubt that he shall be back. I have little doubt he shall pen a book deal or publish his manifesto. I have little doubt you have had a monster created in your midst. His verdict shall be the calling card for the next atrocity as people who bear arms and hold grudges now know – you can rampage and kill with some sort of impunity. Terrified is an insufficient word for many a community in the US right now and we can feel it across the Atlantic. Why can’t 12 good people and true in a courthouse not feel it too?