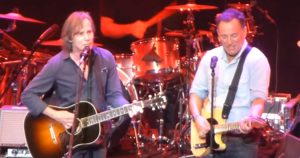 I grew up in a small village in Holland, about 10 miles from the German border. At a young age I could speak both languages fluently and our dialect was almost the same as the people spoke across the border. On a Sunday morning in 1984 I was watching German television: they were doing an interview with a handsome softspoken American singer. He had the most sweetest smile and said the words “you know “in almost every other sentence. His name was Bruce Springsteen and I was 15 years old. He had an album coming out soon with the title “Born in The USA”.

I was mesmerized and bought the vinyl record, with my pocket money as soon as it was released in Holland. Then came the announcement he was coming to Holland to do a concert at a football stadium in Rotterdam. I was determined to go there but my parents wouldn’t let me.

I was too young to travel all alone by train, Rotterdam was 3 hours away, and what about after the concert? I could get mugged or killed in the dark! To say I was devastated was an understatement. Then there was a light at the end of the tunnel: an advertisement in a local newspaper announcing an organized bus tour to see Bruce Springsteen Live. I showed it to my parents and told them there were adults who would look after us kids the whole time. They gave in and I was allowed to go. I was beyond happy! I remember my dad driving me to the bus depot, getting on the bus. I was sitting behind the bus driver and made fast friends with the guy next to me. We talked about Bruce and which songs we liked and the music on the bus was of course his.

I changed into my Springsteen t-shirt on the bus and when the bus arrived at the stadium, I was good to go. The concert lasted more than 3 hours and the crowd was the biggest I had ever seen.

The ride back home was buzzing, and I remember people singing in the bus. When the bus pulled into the station, I saw my dad waiting for me. I think it was 2 or 3 in the morning.

I will never forget the words the man, standing next to my dad, said when I approached: “Can you believe we are standing here in the middle of the night just because our kids want to see some crazy American?” My dad shook his head and laughed. Bruce was my very first concert and it wouldn’t be the last. A lifelong love story had started, and I still am in love with this man who gives 4-hour concerts even now at age 72.

Jackson Browne is a different story. I remember reading about him in a Dutch music magazine called OOR. They did a big spread about this darkhaired singer from California who had a new album coming out:“ Lives in the balance”. The year was 1986 and I was 17. It was the first album he made sober: no alcohol and no drugs. I bought it when it came out. Love at first sight.

The music, the lyrics, his political statements, his voice. Jackson didn’t shy away from telling America off. He was bold and so honest. The title song “Lives in the balance” has some of the sincerest lyrics ever written and they still stand today: On the radio talk shows and the TV You hear one thing again and again How the U.S.A. stands for freedom And we come to the aid of a friend.

But who are the ones that we call our friends These governments killing their own? I was blown away by it. So powerful. I just knew right then and there that Jackson was very special.

I had to write him a letter telling him how much I loved the album and the songs. Imagine my surprise when a few months later a signed picture came in the mail. I still have it.

It wasn’t until November 1996 that I saw him Live for the first time: The Carre Theatre in Amsterdam. I remember parking my car at the leisure center in Diemen, just outside of the city. Driving through Amsterdam is a nightmare with all the trams coming from all sides. A cab brought me to the theatre. He was on stage alone and the whole set was acoustic.

Stunning and Beautiful. Just him, his guitar and piano. After this many more gigs followed all over the world.

Jackson is a storyteller. He engages with the audience, tells stories and jokes and asks what they want to hear. Music requests are shouted throughout the concert, and he happily obliges wherever he can. He did a concert at The London Palladium in November 2004 and of course I was there. A polite request from the start: “I don’t mind you taking pictures but please do not use flash as it bothers me performing” Nobody used the flash that evening. Politeness works like a charm.

Bruce and Jackson are the two greatest loves of my life: As a teenager growing up and as an adult now.