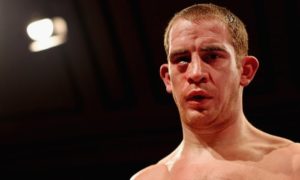 “Like many of the truly great boxers, his first gym was the street.” © Mark Turley, The Journeymen

I first came across Johnny Greaves in Turley’s book where he merits a chapter that captures much of the local color of where Greaves comes from but oftentimes makes it difficult to warm to the figure that emerges from the pages of the aforementioned streets.

I then watched Cornered on BT Sport.

Charting the end of his career this is a truly remarkable documentary which shows just what toll the grind of keeping it going takes on the lifeblood of this sport. Greaves comes across as a man who has complete knowledge not just of who he is but also what role he plays in the sport and in his own life. His battles with mental health are laid bare but also his resilience. It is a human touch that truly does reach you.

Greaves fought at light welterweight and after 100 fights, in the away corner, the southpaw called it quits. He won 4 times and had 96 losses. It is an interesting story. In fact, it is a fascinating tale.

Up until that final fight he had won only 3 contests but in his final scrap, his last hurrah, in front of many who had tended his wounds and heard his war stories, he won his final fight. It was an exceptional end to the career of a man who gave such a massive part his life to the sport.

Greaves turned pro after being on the unlicensed circuit. Many on that merry go round think after a few white collar bouts that they can get into the ring and campaign at world level within a few months. Greaves was not so daft.

That is not to say that he appeared to lack ambition. Going on 100 fights and then wanting to end on a high shows not just dedication but also pride. Greaves knew his place, but he also knew his worth.
He made his pro debut in 2007 when he sustained a points loss against Rob Hunt. It took 11 tries before a win but by then it was pretty clear how things would progress. Against Sergejs Rozakmens he got a first round stoppage, though his opponent, in his 24th fight, had only won twice!

And because of that he suffered a journeyman set back. When an away fighter wins one, people get wary that they may not be up for playing the losing part. The politics of boxing became something to which he returned time and again as he tried to explain why he wanted out the sport in the documentary and his interview in the book.

As it turned out though, he was pretty reliable as a journeyman.

And he knew what was likely to happen each and every time he got in the ring. If you are a fighter on the way up, you need to sell tickets. Those tickets can often define how much or whether you are ever going to get paid. It’s a harshness that can sometimes take your mind off preparations. Good ticket sellers should never lose to a journeyman even if the fight is a close one. Everyone in the venue knows that. Occasionally there can be close calls that go the way of the fighter who has the losing record, but they are rare enough to be notable. It leaves a bitter taste in the mouth at times, but it is a reality as the newcomer is building up – they need wins to make them popular, they need to be popular to sell more tickets, they need to sell tickets for promoters to like them and their world title ambitions begin with their first ticket sale.

Of course, there comes a time when ticket sellers are no longer needed as world title fights, and belts are laid on the line but for British boxing, the reputation of a headline act in a small hall show is likely to get protected.

But never, ever take the mickey out a journeyman.

As Greaves himself pointed out in an interview, “Losing well means knowing every trick in the book. So, while ignorant onlookers might see a bum laboring to yet another defeat, those in the know will see a craftsman at work, passing on his skills to an apprentice.”

As to what it is he has the ability to show them and teach them he continued with the following, “I’d teach them movement and how to survive. But I’d also get hired by promoters because I’d talk to their fighters, rough them up with my shoulder, punch them in the spuds. A young fighter needs to taste every aspect of the game and promoters knew I wasn’t going to give their boys an easy night.”

In one interview Greaves was to admit that he dreamt of winning titles. Such dreams were things that kids do but as a professional in the ring, it became about earning an honest and well fought for financial return. He was reported as saying, “I’m a realist and it’s always been about a pound note for me. I could have got a few wins under my belt and started looking towards titles, but that doesn’t pan out for 99.9% of boxers that turn pro.”

The millionaire lifestyle and debates over the size of your entourage do not happen in discussions around Greaves’ career. He had few in his corner and many in his heart when he came up those steps. His brother and manager in Cornered are a particularly close couple. They form a bond that goes beyond manager and being brothers, you can understand that, but they seem like two halves of a winning dynamic duo – just that victory seemed a little different to that which you would normally associate with the sport.

The 100 fights Greaves fought included Gavin Rees, Lee Selby, Anthony Crolla, Tyrone Nurse, maxi Hughes, Bradley Skeete, Jack Catterall and a plethora of other champions and contenders throughout a stellar career. His job now, through his Greaves Gym is to train the next series of journeymen who shall do as he did, but this time with a man in the corner who can teach them a thing or two about survival, pride and achievement – he hand knitted the t-shirt.