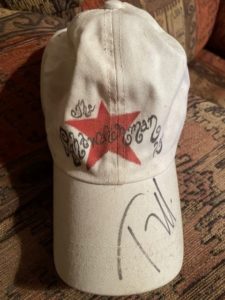 It was Sunday, 9 October 2011 and I was mesmerized by something I found on YouTube. (I remember the date as it was my hero Jackson Browne’s birthday)I found a Bruce Springsteen video: ” The Ghost of Tom Joad” He was playing with a guy I never heard of: Tom Morello.

There was something about this guy: dark, handsome, tall, strong, a distinctive voice although not really a singer. He gave me goose bumps and struck a core with me. Then he did this guitar solo that absolutely blew me away. I had never seen anything like this in my whole life. He did things with his guitar I had not seen anyone else do. Who Was This Guy? I went searching for him on the internet and up came: Rage Against the Machine, Audioslave and The Nightwatchman. I wanted to post the video on Facebook but not on my wall. I found a Tom Morello group on Facebook and posted the video there.

It didn’t take long before someone responded. A reaction came from Mary in Ohio. She told me she loved him and had been a big fan for years. She went to gigs all over America to see him Live. We became Facebook friends instantly. A few days later I found out that Tom Morello was coming to London the following month for a gig at The Brixton Academy. I got myself a ticket straight away. I wanted him to do that song and play the guitar and watch it with my own eyes. When I told Mary on Facebook, I had a ticket she told me about the traveling hats: Baseball Caps she created herself and how she took them to every concert in the hope Tom would sign them. No luck. No matter how hard she tried. She asked me for a favor: If I could give her my address and she would mail the hats to me and if I could try to get them signed at the gig.

I told her I would try. I had no idea how, but I would do my best for sure. Mary was thrilled and said she would send the hats that day. Days went by and then the package came in the mail: The Hats Had Arrived. The day of the concert was a normal working day. After work I took the London Underground and when I arrived, I saw this long queue already outside the venue. It was still way too early, and the doors wouldn’t open for at least another hour. But I decided to stay and join: Better now than come back and find it three times around the block. The hats were in my bag, and I had no clue how to get them signed. All sorts of scenarios went through my head. Then I had a stroke of luck or maybe a question of being at the right place at the right time: A guy with a guitar case walked past the queue and he looked very familiar. I had seen the guy before but where?

A light came up in my head and suddenly, I knew who he was: Carl Restivo, guitar player in Tom Morello’s band! This was The Golden Opportunity I had been waiting for. I approached him and introduced myself to him. I told him about Mary and her traveling hats and how she had been trying to get them signed for so long by Tom. How she mailed me the hats all the way from America after we met on Facebook. Carl looked at me and asked, ” That is such a cool story! Where are the hats now?” “In my bag”, I answered. ” Give them to me “, Carl said, ” I will try to get them signed for you. Not promising anything but I will try. Come to the stage door after Tom is finished” I thanked him profoundly and told him I would be there. He took the hats, smiled, and disappeared inside the venue. Not long after that very lucky conversation the doors opened. I found a spot close to stage and took my camera out of my bag. I was and still am a keen photographer and like to film stuff. There was no support band. Tom came on stage and started playing. Halfway through his gig came the song I was waiting for: ” The Ghost of Tom Joad ” and my camera was ready. It was stunning, powerful and the guitar solo was INCREDIBLE! He did all the stuff he did in that video with Bruce.

He even played the guitar with his teeth! (I posted it on my YouTube Channel as soon as I came home)

When Tom was finished and walked off stage, the crew started to prepare the stage for the next act. I left as I didn’t come for them and besides, I had a much more important task: Collecting the, hopefully, signed hats! I squeezed and pushed my way through the crowd to the back where the exit was. Not easy but I got there eventually. I went outside and waited anxiously. Then I saw someone waiving at me from the stage door. I walked over and a guy introduced himself to me as Tom’s manager. He said: “I believe you are looking for these?” He gave me the hats and they were SIGNED!!!! I couldn’t believe my eyes. I was so happy!

I asked the guy if it was possible to see Tom and say Thank You and maybe get a picture with him but was told Tom was doing an interview in his dressing room. I told the guy to Thank Tom for me and from Mary and he said he would. I put the signed hats in my bag and walked to the tube station. I guarded them with my life on my way home. Back home I took a picture of the hats and posted it on Mary’s Facebook wall. I just knew there would be a huge reaction. I went to sleep and checked as soon as I woke up. Mary was completely over the moon! She wrote that she started to cry when she saw the hats and that she couldn’t believe her eyes. She was so grateful and told me to keep one hat for myself and send her back the other one. She said if I checked the hats, I would find my name in one of them, and sure as hell there it was. A surprise and thank you for me. I guess Mary knew, somehow, I would get them signed. I send her the hat and kept the one with my name on it. As soon as Mary received hers, she took a selfie wearing it and posted it on Facebook. This was in 2011 and Mary and I have been friends ever since.

She came to visit me in London in 2013 and in 2014 we met up in Rome. In 2016 I flew to Las Vegas to visit her as she moved there from Ohio. Now she is back in Ohio, and we are planning to meet up again soon. All these years I wondered about the magic of 2 traveling hats and how they became the key to an enduring friendship between Mary and me. Mary finally met Tom at a protest march In New York City and even went for a drink with him.

She posted a selfie on Facebook and her face was absolutely glowing! I was so happy for her. I still don’t know if she told him the story about the hats, he signed for us in London. Maybe I should just send him this story and see if he remembers after all these years.