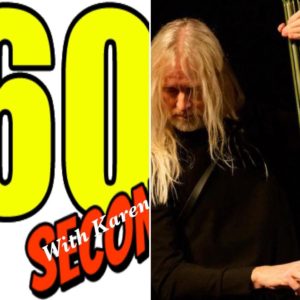 Interview by Karen Beishuizen
Photo of Nick by Howard Shiau

I had this idea for a quick interview with a known person based on something I saw in the free London Metro newspaper: I launched my 60 Seconds for RSR with Nick Beggs: We all know the 1980s band Kajagoogoo with their big hit “Too Shy”: Singer Limahl with his black and white hair and the very cool blond bass player. Yes, that is Nick Beggs.

KB: We know you of course from Kajagoogoo, Ellis Beggs and Howard: Are you still in touch with your former band members?

Yes. I have good friendships amongst them and it’s never very long before someone offers the other out for a beer.

KB:  I remember you produced a girl’s band called Industrial Salt. Are you still scouting for new artists and producing new talent?

Yes, I help develop that band and it was a lot of fun. Actually, I listened to that record the other day and was surprised at how much I still like it.

KB: As for new talent?

I guess I’m always on the lookout for the right thing. But that doesn’t mean I want to hear everyone’s shitty demos. (LOL)

KB: You have a new album out: ” Music for Drones “: How did this start and what is it about?

This is not a new album. It’s over a year old. It was a lock down release aimed at the fan base. It’s a collection of ideas bundled together and available through my website. The ethos is pay what you want for it. My newest project is Trifecta Fragments. That’s the latest release.

KB: You also have a new album out with your band The Mute Gods: Can you tell me a bit more about this?

No. Again, that isn’t a new album. That was released in March 2019. Atheists & Believers is the third in a trilogy of records I released as The Mute Gods. Alex Lifeson from Rush feature on one song titled One Day. Check it out.

KB:  You are an artist as well with artwork for sale: Have you always been drawing and creating art?

I went to art school in my teens but dropped out to do music. It seems only right that I should keep that part of me alive in some way. It’s a great escape and engages me in a different way to music.

KB:  You don’t like to be pigeonholed. Is there anything you like to do you have not done yet in your career?

I’d like to make a punk album. I just brought a vintage Rickenbacker that sounds really angry. Maybe I’ll try something with that?

KB: Q: You play different kind of instruments: Bass, Guitar, Keyboard: Any instruments you don’t play but you would like to play?

KB:  Some people like Sir Paul McCartney used the Covid Lockdowns to write and record new songs or complete albums. What kept you busy during these times?

I walked my dog a lot. Did some drawing for an art exhibition which will open sometime in the future and tried to help my family not go insane. I felt like I was one of the lucky ones despite losing my father and his partner.