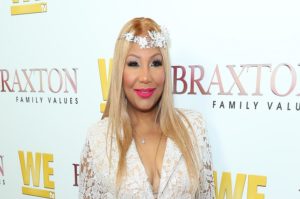 Traci Braxton, sister of Toni and Tamar Braxton and star of the reality TV series BRAXTON FAMILY VALUES passed away March 12, 2022, following a cancer battle. She was 50.

In the late 1980s into the early 1990s Braxton and her four sisters had a short-lived record deal with Arista Records as a group before parting ways not long after. In 2013, Braxton began a solo career and released the album “Crash & Burn” on October 7, 2014, with the lead single “Last Call”. She released a second album, “On Earth” on August 24, 2018.

Braxton reunited with her sisters for the WE TV reality show BRAXTON FAMILY VALUES. The series ran for seven seasons from April 12, 2011-December 17, 2020, producing 148 episodes.

Ringside Report sends our condolences to Traci Braxton’s family during their time of grief.