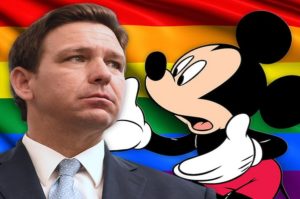 I have been “distracted” over the last some weeks by the incredibly horrific and horrendous news coming not just from Russia and the Ukraine, but, and in addition, from a place which I used to visit on a fairly regular basis but which, unhappily and disgustingly, has become a home and haven for FAR right wing bigots, maniacs, lunatics and total nut cases, not the least of whom is the state’s now completely out of both control and touch with reality governor, Ron DeSatanis.

Governor DeSatanis is a disciple of Herr Trumpler, and if there is a lower level of insult I simply do not know what it could or might be, but one thing is certain: For a supposedly educated man, DeSatanis is as close to being an adherent of naziism as is possible without putting on the swastika and demanding that his followers bellow out “Heil Trumpler” or “Heil DeSatanis” each and every time he is in their presence.

Besides the nonsense, the shamefulness, the utter vileness of his getting the state legislature to ban abortions after fifteen weeks (regardless of any deformities or physical deficiencies of the fetus, including having no brain, when it is, in actuality, the governor and the morons in the state legislature who voted to pass this horrific legislation who have NO brain), that bunch of geniuses have passed a bill which makes it a statutory violation in Florry-DUHHH to use or say the word “gay” in any of the school’s classrooms. That, coupled with the legislature’s attempts to ban books, have brought the stench of fascism and naziism to and upon the once know at the Sunshine State, but which is now under such a dark cloud of repression that it should be known as the neo-SS state.

Sadly and unhappily, Florry-duhhhh has become so people and populated with low grade bigots, racists, anti-semites, nitwits, morons and complete and total cretins that it has reached the point at which the state is, in too many places and for too many reasons, completely unsafe, a perfect example of a horrible example being the law which has legalized shooting somebody if you even think or feel you are being threatened. What kind of civilized society allows that kind of actions by its citizens, and since you asked, I will tell you: a state which is now being run by low grade bigots, racists, anti-semites, nitwits, morons and complete and total cretins. Regretfully and unhappily, that will be the legacy which will be left to the young people of what was once considered the most progressive state in the south but which is now at a level of bigotry, racism and anti-semitism comparable to the worst days of those adjectives being in the forefront of the behaviors of many, too many people in such as Georgia, Alabama, Mississippi, South Carolina and Arkansas, as well as Texas and probably the rest of the south.

The stupidity of the state legislature is at a level that is so horrifically vile that trans-gender females are now banned from participating in inter-scholastic sports. The shamefulness of all that is going on in Florida is something that only its citizens can put an end to, and that by “turning the rascals out.” The problem, of course, is that, sadly, regretfully and unhappily, it appears that the low grade bigots, the anti-semites, the nitwits, morons and complete and total cretins (and those are their good points) apparently well outnumber those who are horrified by what has happened in and to the state, and until such time that the vile, far right wing, hateful garbage who make up too much of the state’s senate and legislature (as well as the governor’s office) can be voted out, it will only continue to get worse.