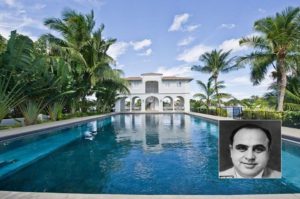 At some point in the not too distant future, I will be exposing the shamefulness of the actions of certain individuals in the so-called Greater Miami historic community in regard to naming themselves—with the connivance and contrivance and utterly vile willingness to participate in those acts and actions of bigotry, prejudice and discrimination against this writer of and by a particular group and several individuals, completely subverting the idea and concept of collegiality, fraternal cooperation, and decency–but that to be a discussion in another column in a shortly not-too-distant future article.

Right at this moment, though, and for the here and now, a discussion dealing with the complete lack of understanding of what historic preservation means and what it was meant to be by too many of those who our late, great South Florida talk show host, the benighted (and so sorely missed) Neil (Neil, God!) Rogers would have referred to as “front running phonies.”

It was bad enough when a number of the aforementioned know nothings wanted to save “the Al Capone house” on Miami Beach’s Palm Island on the MacArthur Causeway, those individuals knowing nothing (or at best, next to nothing) about Greater Miami and/or Miami Beach history because the fact and truth of and about that house was and is that Mr. Capone purchased the house in 1928, and it was and is no more historic than several hundred other Miami Beach homes of earlier and even later vintage. (The house was “saved” by a buyer who spent $15.5 million on a terribly beat-up and run-down property and the fact that “Big Al” had lived there until his death from syphilis of the brain leading to cardiac arrest in 1947 did not and does not make the house “historic.”)

Now, though, said lot of front-funning phonies became (and, thankfully were unsuccessful) enamored of and half-hysterical in their mis-guided attempts to save the Deauville Hotel at 67th Street 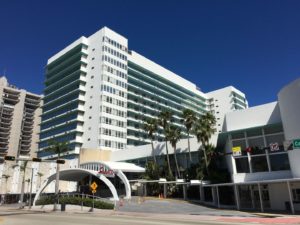 and Collins Avenue. Among the inane reasons for their maniacal desire to “save” a building which was, simply put, a monolith, was that the Beatles played there, and the rejoinder to that is and should be, “so what?” The Beatles played in hundreds of venues around the world and the fact that “the boys” played in and at any one of them did not and does not make that location historic in and of itself.

The Deauville, built by Miami Beach “financier” with reputed ties to a group known as “the outfit,” Sam Cohen, purchased the MacFadden-Deauville Hotel on that property, and here is where we divert for a moment from the Deauville discussion.

In order that our readers know and understand where this writer is coming from (and how I got to be where I am), I do believe it is important to point out, at this juncture, that I am America’s senior collector of Florida East Coast Railway (F E C), Florida transportation memorabilia, Miami memorabilia and Floridiana, said gathering up of historic Florida material and memorabilia having begun in May of 1958, when I walked into the F E C city ticket office in the Ingraham Building in downtown Miami and asked for timetables. This coming May begins my 64th year of collecting (as I like to say—or write) “all this junque,” and today our collections of FEC Railway and Florida transportation memorabilia are the largest in the world: they are larger than the state museum’s collection (of like items, of course, not their entire collection) and larger than the Flagler Museum’s collection, the same disclaimer applying. But, and in addition to that, we hold the largest private collection (private as opposed to the museums) of Miami memorabilia and Floridiana in the country, said collection larger than, in no few cases, most of the public museums in the state. And why is it necessary to make those statements?

Why, then, is it necessary to recount those facts? Because organizations such as Miami Design Preservation League will not invite me to speak there because, according to the past or current director, “he is controversial.” And what does that mean? Nothing except that in my talks I speak ONLY the truth, and to exclude a historian from speaking to or at any organization for that fallacious and ludicrous reason is nothing other than shameful. I have become known as (among other titles) “the great debunker,” and have become known for debunking the hooey, the nonsense, the (if I may) crap and garbage spewed out and foisted upon the unknowledgeable and unknowing by such as Miami’s walking fountain of MISinformation, garbage such as, “oh, Julia Tuttle, (one of the, not “the” founder of Miami) sent Mr. Flagler some orange blossoms so he extended the railroad to Biscayne Bay! What?!! That is utter, total and complete nonsense. How did she send them in 1895, by FedEx Overnight. By US Express Mail? No such thing ever occurred and I have debunked that and many more fables, fairy tales and bubbemissehs numerous times, and if that makes me “controversial,” so be it.

In addition to those holdings, though, this writer is America’s single most-published Florida history book author (33 at last count, none self-published) and the author of close to 400 articles, seven of which have appeared in refereed or juried publications. Unlike the aforenoted, I do not—ever—make stuff up as I go and every sentence is a statement of verified fact.

So now let’s get down to business in re: the Deauville Hotel and all of that comes down to one very legitimate and important question: where were all the front-funning phonies who decide, without logic or factuality, that a building is historic, when in truth and fact it is no such thing, which, therefore brings to the forefront the next logical question: where were they to save the buildings on Miami Beach which were truly and legitimately historic and absolutely, positively should have been saved, viz, the original MacFadden-Deauville Hotel; the original Roney Plaza Hotel; the Gulfstream Hotel; the Roman Pools/Everglades Cabana Club on the south side of 23rd Street directly across from the original Roney Plaza: the original Miami Beach Federal building on the northwest corner of Lincoln Road and Washington Avenue; the original building which housed Joe’s (later with the words “Stone Crab” added) Restaurant; Carl Fisher’s first hotel, The Lincoln, on the Southwest corner of Lincoln and Washington, and his other hotels the Flamingo, the Floridiana, the Nautilus and the King Cole; the original Miami Beach First National Bank on the northeast corner of Lincoln and Alton Roads; Mother Kelly’s on the corner of Dade Boulevard and West Avenue. I will stop here but the list goes on almost infinitely.

And now “they” wanted to save the Deauville? That would have had the logic behind it of saving the Miami Herald building on the bay between the MacArthur and Venetian Causeway, which was as ludicrous as saving the Deauville would have been, particularly because, in the case of the Herald, what absolutely, positively should have been saved was the “old” Herald building at 200 South Miami Avenue, an edifice truly historic (like those mentioned in the preceding paragraph), and truly worth saving.

So, and now that you have read this far, here is the crux of the matter: If “they” wanted to save the Deauville, why didn’t “they” come up with the money and buy it from the owner, who spent millions to do so, and, as usual, the answer is simple but unacceptable in a free market economy in a capitalist society: “they” wanted government not only to condemn it and buy it, but then to put the millions and millions necessary to restore it into the property, and that, thankfully and because the building was NOT historic, did not happen.

Ladies and gentlemen, you may now have at me with the (phony) slings and arrows of outraged fortune but until you show me that you either had or have the funds to put into and buy from the owners (that is how capitalism works) the building you want to preserve, please believe and trust me that those slings and arrows will bounce off my back and any other part of me that they manage to touch like schmalz off a piece of warm matzoh. Be well, all, and please stay safe, and as we say in South Florida, “thank you for not shooting and have a MIAMI NICE day!”