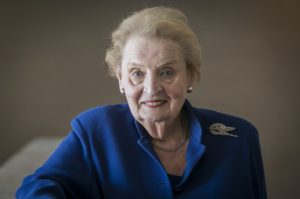 Madeleine Albright, the first woman to serve as U.S. Secretary of State, passed away from cancer on March 23, 2022, in Washington, D.C. surrounded by her family and friends. She was 84.
Albright’s family said in a statement: “We have lost a loving mother, grandmother, sister, aunt and friend, as well as a tireless champion of democracy and human rights.”

Albright served as the 64th Secretary of State from 1997-2001 under President Bill Clinton. She was the first female secretary of state in U.S. history. She was also appointed Ambassador to the United Nations, serving from 1993-1997.

Albright was highly respected and praised for her work and the positive changes she made for the American people. Tributes poured in from Presidents Clinton and Obama (who awarded Albright with a medal of freedom in 2012), and President Biden, who remembered Albright as “a force for goodness, grace, and decency-and for freedom.”

Ringside Report sends our condolences to Madeleine Albright’s family during their time of grief.