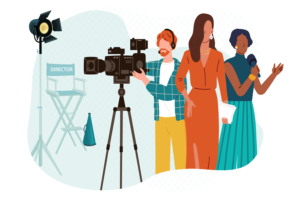 During the pandemic, like most people who find themselves at home more, I have watched a lot of movies and new series on streaming services. I have looked at old favorites of mine, new releases, Indie films, documentaries, and more. One of the things I have been noticing is the increase in diversity and representation. I won’t pretend there has been some major disruption in business as usual, but I thought I could detect an uptick in more women and BIPOC characters in television and film. I’ve found a few new favorites which my sons and I have watched, and commented on, where the acting roles of Black and biracial characters are ones we’ve identified with. Some of the positive plots and themes diverged from the noticeable pattern of white male characters typically being cast as the protagonists.

Another area of change that caught my interest was the increase in female characters with supporting or major roles. I decided to check on the numbers and what I found surprised me. A hefty 85% of films feature more male than female characters according to Dr. Martha Lauzen, the director of the center for the Study of Women in Television and Film at San Diego State University. There are still almost two male characters for every female character, and women comprise slightly less than one third of sole protagonists in films. What did make an impressive difference is when the directors’ and/or writers’ teams had at least one woman or BIPOC individual on the team, then you saw higher percentages of diverse actors and actresses in protagonist’s roles.

Over the last two decades, annual studies like Celluloid Ceiling and Thumbs Down: Gender and Film Critics, and Why It Matters, have considered the representation of over 25,000 characters appearing in more than 1,100 films. The study looked at over 3,100 characters appearing in the top 100 domestic grossing films of 2021 from Digital Entertainment Group’s Watched at Home list. However, Netflix, Amazon Prime, and Disney Plus do not contribute to the Watched at Home list, but you can watch programs on their apps and notice the increased representation for yourself. If we had that data, it would be interesting to see how those three streaming giants contributed to an uptick in diversity of characters.

Sole female protagonists increased ever so slightly from 29% in the first year of the pandemic to 31% last year. There was also an increase in Asian and Latina roles for women. Black females comprised 16.4% of major female characters, up from 13.2% in 2020. 8.4% were Asian or Asian American (up from 6% in 2020), 0.3% were Native American, 0.5 were MENA, and 1.4% were of multiple races or ethnicities. Films such as “Encanto,” “In the Heights,” “West Side Story,” “Spirit Untamed” and “Cry Macho” brought the percentage of Latinas in major roles up. Major roles for Asian and Asian American females went from 5.7% in 2020 to 10% in 2021. This increase was due in part to films like “Shang-Chi and the Legend of the Ten Rings,” “Mortal Kombat,” “Minari” and “Raya and the Last Dragon.”

The findings suggest the increases are still largely due to the presence of a few diverse actors and/or actresses in selective films or television series, “rather than their integration in a wide variety of films,” as Dr. Martha Lauzen concluded. There’s still a lot of work to do when it comes to proportionately representing people of color on TV and in films. Most of this work will be behind the camera. UCLA did a study entitled “Hollywood Diversity: A Tale of Two Hollywoods,” which focused on TV. Darnell Hunt, Dean of the division of Social Sciences at UCLA College and co-author of the report said, “There has been a lot of progress for women and people of color in front of the camera. Unfortunately, there has not been the same level of progress behind the camera…That’s very telling, particularly in light of our current racial reckoning.”

Network heads, creator titles for digital programs, digital scripted show creators, credited writers on broadcast (digital and cable) and directors are among the positions where there hasn’t been significant change. American audiences are increasingly diverse, and we prefer diverse film content to represent ourselves as a nation. According to the aforementioned UCLA report. “Decisions about what types of films to make, how large a budget to assign, how the film will be marketed and who will be at the directorial helm are all made by the men and women who occupy Hollywood’s executive suites,” the report says. These decisions continue to be dominated by 91% white and 82% male heads of filming studios. Until that dynamic changes, we need to put a call out to women and BIPOC writers and directors. This will encourage more diversity in the characters and plotlines of shows and movies and ultimately leading to more acting jobs for women and people of color.