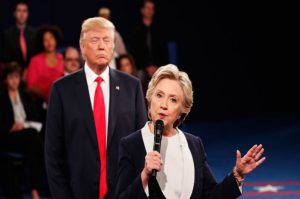 Well folks, I guess it doesn’t matter if he wins or loses – Donald J. Trump will sue you no matter what the election results are. Why? It’s all part of his longtime legal strategy.

It seems like it was a century ago, but the 2016 election still plays a significant role in American politics. Regardless of who you voted for, no one can deny that it was the election that drastically changed this country. What followed in the years afterwards is also up to interpretation depending on what perspective you hold about the 45th president.

Although Hillary Clinton won the popular vote by more than three million, Trump won the Electoral College vote – 306 electors to Clinton’s 232 electors – which he dubbed as a blowout win; and ironically the same count happened in the 2020 election where now-President Joe Biden pulled 306 electors to Trump’s 232 electors. Only this time it wasn’t a blowout win, it was cheating!

Since that day we have seen Trump throw meltdown after meltdown over the results to no avail. Not even the Supreme Court (which seats three justices placed by DJT) would take the case. So now that there’s no other way to take his 2020 election loss to the courts, Trump’s decided to go back to where we all started – suing Hillary Clinton and the DNC over the 2016 election.

Trump’s lawsuit was filed in Florida by Boca Raton attorney Peter Ticktin who helped write the sinuous 108-page lawsuit against Clinton and the DNC. The suit alleges that Clinton and dozens of other co-conspirators acted in an “unthinkable plot” to “cripple Trump’s bid for the presidency.” How so? The suit continues, stating that the Clinton campaign and DNC pushed the “spurious allegation that the Trump campaign had colluded with the Russian government to interfere in the 2016 presidential election.”

According to multiple reports, there are 26 other people and entities named in the lawsuit; including Clinton’s 2016 campaign chairman John Podesta, the Democratic National Committee as previously stated, former FBI official Peter Strzok, and U.S. Rep. Debbie Wasserman-Schultz (D-FL) who was the head of the DNC at the time. “There are serious wrongs here that need to be redressed,” Ticktin stated about the allegations made in the lawsuit.

The suit and allegations made in it should be of no surprise to anyone. Over the last few decades, Trump has spent his time taking political and personal grievances into reasons to pursue legal action. Throughout his entire business and political careers, Trump has used the courts to vent his complaints and intimidate his adversaries by destroying their reputations all while gaining media attention.

So the fact that he is revisiting one of his most notable grievances is just Trump staying true to form. Of course, Trump paints himself as a victim of a massive racketeering conspiracy where Clinton, her aides, the DNC and FBI officials led the investigation into Russian collusion after knowing that the allegations had been “based on a false and contrived premise.”

“Acting in concert, the Defendants maliciously conspired to weave a false narrative that their Republican opponent, Donald J. Trump, was colluding with a hostile foreign sovereignty,” Trump’s legal team wrote. They continue to describe the alleged scheme as “so outrageous, subversive and incendiary that even the events of Watergate pale in comparison.” While it’s true investigators blundered on their handling of their Russia probe, Trump wasn’t necessarily cleared of anything. In fact, Robert Mueller – the attorney who lead the investigation at the DOJ – has even said that Trump wasn’t exactly an innocent angel in his actions.

Last year, DJT had a similar suit filed against the three largest tech companies in the U.S. claiming that conservative voices and himself had been wrongfully censored after his accounts were indefinitely suspended. As you can see, Trump has a pattern of filing frivolous lawsuit after lawsuit, time and time again.

The lawsuit is still in the preliminary phase but it is sure going to make some good entertainment for the rest of us. Especially if they end up the same way the others have – thrown out into the garbage.