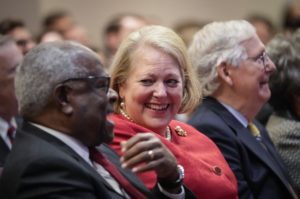 Supreme Court Justice Clarence Thomas is no stranger to public scrutiny. Starting on the day he was nominated to the court through the present day, Justice Thomas has faced accusations of sexual harrassment by Anita Hill to public outcry of his refusal to recuse himself from cases surrounding January 6th. Whether you agree or disagree with the decisions made that got Thomas seated on the bench to his choices in refusing to sit out on certain cases, we can all agree that Justice Thomas has greatly impacted this country for over 30 years – more than any president has since that time.

Here’s a brief review of what Justice Thomas has done – or tried to – on the bench: (1) In Bush v. Gore (2000), he voted to install a Republican president; (2) In Shelby v. Holder (2013), Thomas voted in favor of the dismantling of key provisions in the Voting Rights Act; (3) More recently, in Brnovich v. DNC (2021), Thomas joined Justice Gorsuch’s opinion which suggested that only the US DOJ is allowed to file a lawsuit using the Voting Rights Act; (4) He’s called for the Court to reverse New York Times v. Sullivan (1964) which enables journalists to report the news without facing intimidation or sanctions by political officials.

Vox’s Ian Millhiser perfectly summed up Thomas’ time on the SCOTUS, stating that the justice “imagines a world where state lawmakers have broad authority to skew elections in their party’s favor. He would strip journalists of the First Amendment protections they need to do their job safely. And, if a left-of-center government somehow did emerge despite these constraints, Thomas would strip that government of most of its authority to govern.” Like husband, like wife.

Even though he has come under fire for failing to recuse himself from cases that may or may not involve his wife, Ginni Thomas, it is important to note that Justice Thomas has recused himself throughout his 30+ year tenure from multiple cases that held ethics concerns. So when Democrats started calling him out this week over his wife’s texts to Trump’s former Chief of Staff Mark Meadows, I was immediately intrigued to review his decisions on the SCOTUS, including the upcoming cases that will involve January 6th.

If you aren’t aware, it was revealed that Ginni Thomas had played a big role in not only the January 6th debacle but also pushed election fraud propaganda after the 2020 presidential election. “We are living through what feels like the end of America” while she also sought actions attempting to overturn “the greatest Heist of our history.” Not only did Ginni Thomas praise the “Stop the Steal” rally on Jan. 6th that prefaced the Capitol insurrection, she also attended it.

For as long as Justice Thomas has been on the SCOTUS, his wife Ginni has for a long-time been known for her extremely conservative activism. While most liberals like myself will disagree with her activist stance, it is not illegal for the spouse of a justice to carve out their own career and to make a name for themself. But usually spouses will remove themselves from any situation which may ultimately cross paths and place their justice spouses in an uncomfortable predicament.

We’ve seen this from the likes of Justice Ruth Bader Ginsburg’s husband, who was a prominent tax attorney and went into teaching. Chief Justice John Roberts’ wife left her law practice and became a legal headhunter. Although Ginni Thomas has made her career as a conservative activist and consultant, there is no legality saying she couldn’t; therefore, she didn’t break any laws by continuing her career. Ginni Thomas, however, is a little different from the others. She never shied away from using her husband’s position to help enhance her career and boost her political influence in conservative politics. Technically not illegal, but definitely borders on the shady AF spectrum.

The conundrum Justice Thomas is facing now is largely due to his wife’s activist career as it is about to collide head-on with his. Justice Thomas was the only dissenting justice regarding the release of the National Archives documents related to Jan. 6th, as well as the only dissent on the case against election fraud of mail-in ballots in Pennsylvania in the 2020 election. Now that the texts his wife sent to Mark Meadows have been published, combined with his history of dissent, the question of should Clarence Thomas recuse himself from all Jan. 6th cases, and if not, should he face impeachment?

Legally speaking, 28 U.S. Code § 455 is the only legislative article that specifically states, “Any justice, judge, or magistrate judge of the United States shall disqualify himself in any proceeding in which his impartiality might reasonably be questioned.” Otherwise, justices of the SCOTUS are not mentioned in all other laws related to judges and magistrates. Justice Thomas’ conservative views have undoubtedly played into his rulings, but that isn’t necessarily illegal either. If it was, even the liberal justices would be facing similar criticisms.

Only one SCOTUS justice has ever been impeached in our country’s history. Samuel Chase was removed from the bench in 1804 due to charges that he acted in a partisan manner on several cases, but by 1805 he was acquitted by the Senate and served on the court until his death in 1811. Abe Fortas is the first and only justice to resign from the bench under threat of impeachment in 1969 due to financial improprieties with a man under investigation for securities fraud. Besides Chase and Fortas, only 14 federal judges (appointed by a president and confirmed by the Senate) have been removed through impeachment.

I think that in order for the court to keep its legitimacy, Justice Thomas must recuse himself from all cases related to Jan. 6th, and should remove himself from any related to the 2020 election. Chief Justice John Roberts is most likely the only person who could get Thomas to do so. If Justice Thomas fails to do so, then Chief Justice Roberts and the rest of the justices should make a decision quickly as Thomas’ poor judgment ultimately tarnishes the institution.