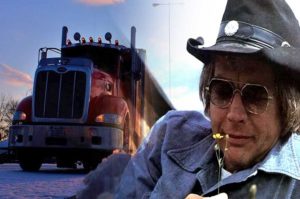 William Dale Fries Jr., who was known professionally by his stage name C.W. McCall, passed away April 1, 2022 in Ouray, Colorado after a cancer battle. He was 93.

In the early 1970s, McCall worked as creative director for Bozell & Jacobs, an Omaha, Nebraska advertising agency creating ad campaigns for companies such as Old Home Bread for the Metz Baking Company. McCall turned country singer and rose to fame with songs about driving 18-wheelers and big-rigs, including his 1976 number one hit “Convoy”, selling over two million copies. In 1978, the feature film CONVOY was released, based on the McCall song, and starred Kris Kristofferson and Ali MacGraw.

Ringside Report sends our condolences to C.W. McCall’s family during their time of grief.