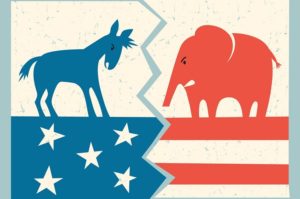 Here is a question I would love any legal scholar to answer; will we ever go back to being Republicans VS Democrats or are we going to continue the Crips and Bloods way of existing? Is America destined to hate each other based on what colors you represent? I say this knowing no one has a crystal ball to look at in the future but more as a wake-up people what are we doing? I will admit I block all Trump supporters off my page. I also say I want unity.

I can give you every excuse in the book why what I do is okay. I don’t care about the reasons but I do want to know how we are going to come together when we are explosive together? We literally live to see one of them go down. To tell the truth, so do they. It’s almost like a Survivor-like attitude. My reasons are legitimate but you probably already guessed it. They say the same thing.

I weep for what I see before us. People used to care about people no matter what. Now it’s about what colors you roll with. People have become vicious behind politics. I will admit I have a ways to go; a long way to be frank, before I try any bridges. They are brainwashed, but of course you know…

We are headed in the wrong direction and it feels like the people they say are woke are somewhere off asleep. How do we let them steal the messaging when they are January 6th supporters? How do we reach people who are not a little bit apologetic to what and who they are? I know I have given up on these people, but these people are people. These people do vote. We can not stop them believing in a lie. (I won’t say it.) Somehow, we are going to have to reach the other side to become whole again. We can’t keep allowing families and lives to be torn apart based on who the President is. I can not say what the answer is. Smarter minds than mine can figure it out. I do know that two sides can not sustain tearing against itself; eventually both sides are broken from the one.

Red, White, and Blue should work in concert to unite a nation. My mom used to say “how are you going to go do anything and your room is not clean?” We call ourselves doing peace treaties for other countries. Why are we not as important?