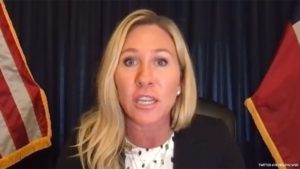 This article is a follow up, a part deux, to last week’s, foretelling what we wished, hoped and intentioned would come through and it DID.

America has a very good friend. My newest favorite federal judge, the Hon. Amy Totenberg, a REAL JUDGE, is not a TFG Appointed lackey who doesn’t have enough sense to recuse themselves from proceedings which include family members, a crime which could lead to impeachment, or afraid to reject the nomination, given the veiled threats communicated, nor does evil in exchange for having debts cleared and a 6 pack.

The Honorable Judge Amy Totenberg, is the real deal. She pays very close attention to what is before her and does not mind sending the foul smelling to the pokey for a fifty year shower and time out.

On April 10th she ruled in favor for the case against Marjorie Taylor Greene, aka. 3-Toes, to continue.
MTG has been running wild in the halls of Congress as if it were her own personal playground. If she wore sneaker skates and raced down the halls, I wouldn’t be surprised.

What I am surprised about, is to learn that she is a highly immature 47 year old with children. That thing is a mother. In my eyes, she is the ignorant, trailer trash type of bully, who has neither the knowledge of how our government works, nor the necessary skills for the job. But that’s me. She cannot spell well at all believing the word “gaspacho”, a cold tomato based soup that tastes like salsa without the chips, is how you spell gestapo. I’ve said this before, she’s a Pendeja Estupidisima.

Her new title thanks to the lawsuit is The Insurrectionist. The Traitor. The Foul. Where’s the red paint? 3-Toes needs a new tat on the middle of her forehead that says VOID WHERE PROHIBITED.

The three groups who sued her, Free Speech For People, Our Revolution and the 14th District of Georgia, her own constituants, (dayum) have Cawthorne in their sites next, as does Judge Amy.

Meanwhile, Cawthorne, forever sitting on his nuggets, sued the North Carolina Board of Elections when they advised him that he was ineligible to run (sorry, too soon?) due to his incitement of an insurrection on January 6th, 2021. Cawthorne’s case was helped along by the North Carolina-based U.S. District Judge Richard Myers II, a TFG Appointed Lackey, who blocked it so that Cawthorn could run; however, after asking: ‘yo, you done wit dat?’, Judge Amy picked up Speed Racer’s case and will be devouring him and his hot wheels any day now. On Friday, Judge Amy said that she had “significant questions and concerns” about Cawthorne’s bogus ruling.

This is getting better than when they shot JR on Dallas. I digress.

The group challenging all clowns in our government believes that 3-Toes needs to be disqualified under the 14th amendment to the US constitution.

Dare you ask? Pull her name up on the web and bring a puke bucket. You see all that? Yep. That’s why.

She helped plan an insurrection. We know it. She knows we’re aware and is raising the volume on her stupidity. GTFO, MTG. No Body Likes YOU and you smell funny.
That is not all that has occurred.

Our Wonderful and Amazing Friends, The MeidasTouch, who sued 3-TOES in February when she blocked them on Twitter, has just won their lawsuit against her. The 10k which 3-Toes had to pay for their attorney fees was then donated to groups which advocate for gun reform. ‘Her Ignorance Inc.’ had a meltdown. I loved reading it. Pull it up on the web and check it out and while you’re there, feast your eyes on her newly reported -$314k in her widdo campaign piggy bank.

Who needs tissues?
Just blow your nose on her skirt. She won’t mind. She does it all the time.

Anyone have Katie Hill’s number? Let her know there are a few vacancies coming up very soon and a room with a view waiting for her on Capitol Hill, cuz Darlings, an office romance “ain’t nutin’” compared to an insurrection.

I adore you all, my Beautiful Sunshine’s.