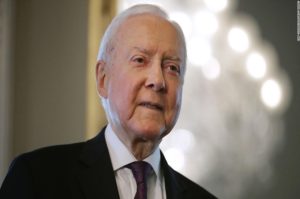 Orrin Hatch, the longest-serving Republican in Senate history, passed away April 23, 2022 in Salt Lake City. The cause of death was not released. He was 88.

Hatch was born on March 22, 1934 in Homestead, Pennsylvania. Prior to his career in politics, Hatch worked as an attorney. He received his education from Brigham Young University and received a B.A. degree in history. A few years later he received a J.D. degree from University of Pittsburgh School of Law. Hatch practiced law in Pittsburgh, and continued after making the move to Utah.

In 1976, after running for public office, Hatch was elected to the United States Senate. He served as a United States senator from 1977-2019. Some of the social issues he dealt with include abortion, anti-terrorism, health care reform, immigration, LGBT rights, nuclear testing, the opioid crisis and religious freedom.

Hatch was awarded the Presidential Medal of Freedom in 2018.

Ringside report sends our condolences to Orrin Hatch’s family during their time of grief.