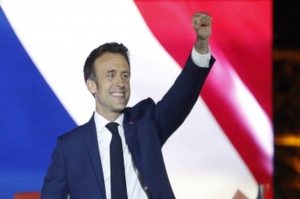 The incumbent French President Emmanuel Macron has won his re-election bid in France’s presidential election. Macron received 58.3% of the votes deeming him the winner.

Macron was able to maintain his seat against his opponent Marine Le Pen during the run-off election on Sunday. Le Pen and Macron came in the top two spots earlier this month in a general race that had 12 contenders total. He is also the first French leader in 20 years to be re-elected in the country of love.

Le Pen has made headlines since the April 10th general vote with her far right ideology.

Still, she was able to pull 41.66% of the nation’s vote. She also increased her vote share from the 2017 race, calling it a “resounding victory” while also vowing to fight in June at the legislative elections. Her controversial support for autocratic world leaders, including former U.S. President Donald Trump and Russian President Vladimir Putin, garnered her a lot of attention and negative criticism.

The French President also acknowledged during the celebrations that a lot of citizens had voted for him to counter Le Pen. In his victory speech, he commended their “sense of duty” and “attachment to the Republic” even though they had opposing political beliefs from his. He told the country he will be the “president for all.”