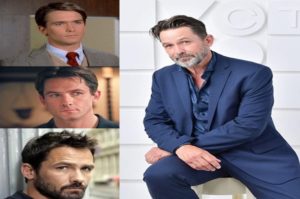 Billy has been a TV and Movie actor for more than 40 years: he played Steven Carrington’s boyfriend in the first few episodes of Dynasty. Many great series followed: Crime Story, Once and Again, The Killing. He played with Jennifer Lopez in the movie “Enough”. He has a new movie out about Hitler’s first defeat called “Kampen om Narvik-Hitlers forste nederlag. He lives with his wife and two young sons in Norway.

KB: The Dynasty fans (myself included) might remember you as Luke, Steven Carrington’s boyfriend, in the very first few episodes. You were very young then, maybe 22 or 23? How did a role like this affect your career afterwards as in the early 80s gay on screen was still a bit of a taboo? How difficult was it to make it come across as believable on screen?

I was pretty excited to be cast on Dynasty. It was highly rated at the time, and the relationship with Steven was the first on US prime time to be openly gay, I believe. It was pretty damned tame, though, the occasional chaste hug being the most risqué behaviour involved. Interestingly, they never told me the nature of the role until I’d been cast, not that it’d have made a whit of difference. Jack and I had some laughs, were maybe a little self-conscious (speaking for myself), are still friendly after all these years. And I got to work with some great people; John Forsyth, Linda Evans, Jack, others. Not sure the role had any impact on the rest of my career, hard to say. Certainly, it didn’t in any way prepare me for Tales of the City which had decidedly less restraint… or clothing. Quickly got over myself consciousness on that one! Don’t exactly know why, but I suspect someone on both those jobs was getting their kicks having straight boys play gay, vice versa. Loved those jobs, great career opportunities and growing experiences, both.

KB: You then starred in the great crime show Crime Story with Dennis Farina? How did you get this role? A show in Chicago 60s style! Great decor, outfits and that theme song by Del Shannon!

I’d stopped through Chicago where my dad still lived, and my old agent told me about this show, now casting in LA but coming back to Chicago. Auditioned out in LA, chewing gum, trying to look street tough (not Dynasty gay) and it worked! I was thrilled. It was fun to go back to my old stomping grounds, where I had family and had gone to acting class, for a super cool, retro cop show! Started playing for my old rugby club again, Chicago Lions, and had just come from an evening match straight back to the production office to watch our premiere, not realizing Michael Mann would be there. Still had my kit on, blood down the side of my head, when I barged in afraid, I might be late. ‘Where the fuck have you been?!’ He said. I tell him, thinking I’m in for it now. He just laughs. After that I figure I had permission to play. But that whole show was crazy. We got kicked out of Chicago after one season. Not sure we were ever welcome to use a location twice. Relocated to Vegas after a (not-very-well) controlled explosion in an elevator shaft went awry toward the end of our Chicago run, scared a bunch of people in an adjacent eatery, flash-tanned a couple of our crew. First day of shooting, strip club in Vegas, standing on my mark with Dennis, we hear a couple pops outside. Dennis, who’d been a Chicago cop when Michael discovered him (the movie Thief) says ‘That’s a 38.’ One of the teamsters had shot another in the chest, right outside the door in base camp. And that’s not the half of it. The show was batshit crazy from start to finish, and I was 26, doing a tv show in Vegas— God we had fun! Dennis is dead now. Paul Butler and Steve Ryan too. Miss those guys still. Bill Smitrovich is still kicking, and Stephen Lang and I have been thick as thieves since. The tales I could tell!

KB: Rick Sammler in the series Once and Again: Great role in a great show! How did you get this role and why did you want to play it? Hard to see the show end.

I’d done a pilot in Ireland, a medieval family drama, for Marshall Herskovitz and I guess he liked me well enough from that. I’d have done anything for Marshall and Ed (Zwick) at that point, two really lovely people to work for. I loved the writing, the attention to character, and was quite eager to try out my light dramedy chops. What a happy gig that was. Everyone was brilliant, and I adored Sela and my entire tv family. The only unhappy thing about it was the network talking out of one side of their mouth, and scheduling us out of the other. I think we had 7 time slots in three seasons. My mom asked me when we’d be airing one week. Told her I didn’t know; I’d get back to her. Found Marshall in the hallway, asked him. Said he didn’t know; he’d get back to me. The producer! It’s no wonder we never found an audience.

KB: You played Jennifer Lopez’s abusive husband in the great movie Enough: How difficult is it to portray such a cold evil man? How hard was it to beat the shit out of Jennifer?

Not difficult; just learn the lines, try not to giggle. She was tough, J-Lo. We pretty well bruised each other up. She made it easy, I have to say.

KB: The Killing: Now that was an awesome series where you played Seatle Mayor Darren Richmond who seems to be involved in the murder of a young girl. How did you get this part? The show was a remake of a Scandinavian series?

Yes, a Danish series which I looooved. Crazy how I got it though. I’d just auditioned for Michael Mann, a horse-race thing for HBO. Hadn’t seen him in 20-plus years. He seemed elated and I was sure I’d got the part, after a long dry spell, but didn’t. Disillusioned, I made a next-morning reservation to Canada, was going off into the wild to lick my wounds, maybe even quit the biz for all I knew. Unbeknownst to me, the director of the Killing was on that flight, called casting from the gate at LAX, told them to dig out the self-tape I’d sent in. I landed in Vancouver to a call from my agent saying that the job I’d wanted so badly that had gone away… had come back! I was to meet the director at a local restaurant. So, there I am, and this sandaled hippie gal I recognized from the gate at LAX walks in, and it’s her, the director Patty Jenkins. A great show, a really fun job: ensemble show, so anywhere from one to three days’ work an episode, in a city I love, great writing, phenomenal cast. Just a dream job, really. I played the part Lars Mikkelson played in the original, an actor I really admire. My partner was then living in Copenhagen, and while I was visiting, they put me on a morning show with Lars and we became pals. Kind of a thrill for me.

KB: You played Detective John Cardinal in the cop show Cardinal for 4 seasons. I heard you liked this show very much? Must have been hard to see it cancelled?

Loved it. A great role, maybe the best I’ve had, and a wonderful collaboration with my scene partner Karine Vanasse, who is pure genius onscreen, a dear soul off it. And we were done, yes, but it has come back to life! Turns out the lead actress from The Bridge, Sofia Helin, saw and loved the show, contacted our producers, suggested another season involving a character to be played by herself. This got the ball rolling, and now it seems we’ll do a fifth season, to be shot in Sweden. Can’t tell you how happy that makes me, now I live in Norway. I can come home on the weekends, and my wife and kids can visit while I’m working… Heaven!

KB: You live in Norway now? Beautiful country. I love Bergen. What made you move to there?

A woman, of course. I’ve been waylaid, pilfered, am now in thrall to a Viking lass, and live on a farm in the south of Norway, where her family have been camping for 450+ years (since Shakespeare was our youngest kid’s age!) Blew my tiny North American mind, I can tell you, the mother-in-law casually mentioning that.

KB: Are you working on something new? I heard you completed a Norwegian movie called Kampen om Narvik – Hitlers forste nederlag (Battle of Narvik : Hitler’s first defeat), I am from Holland so I can read Norwegian as it is very similar to Dutch and German. You play a Consul? What is the movie about?

I’ve done a couple very small roles, in fun pictures, working for Norwegian directors I admire. Narvik, for Erik Skjoldbjærg, is about the battle of Narvik, the first time the Germans were sent packing in WW2. I play the British Consul, yes, which is a stretch for me, and I hope I didn’t embarrass myself (or anyone else). I’ve only seen a couple minutes of it so far, but the footage I’ve seen is beautiful. Also did a day on a Netflix disaster film from Roar Uthaugen called Troll, which I can’t wait to see. It’ll be super fun, I think, to follow a giant troll stomping its way into Oslo! I’m eager to work over here, Europe in general, Norway in particular. The business over here suits me: far cosier, far less stress. Everyone is so chill compared to back home. Actually, this is home, isn’t it.

KB: The world is coming out of a 2-year pandemic with several lock downs where all you could do was stay at home: How did you spend your time? Any hobbies?

We have two boys, aged 7 and 4, and live on a farm. Not much time for hobbies, but when I do get time to do as I will, I love to read, write, potter about in the barn, run in the woods. We’ve been very very fortunate in living as we do; Lockdown on the farm is pretty much any other day, and I very often feel I’m one of the luckiest souls alive.