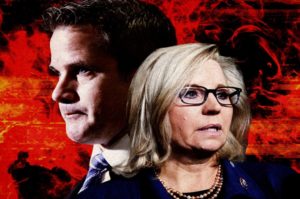 There is a book that is about to be released called “This Will Not Pass: Trump, Biden and The Battle for America’s Future”. It is making the media rounds with the discussion of how McCarthy and McConnell were so appalled at Trump using his supporters to attack the country that they had had enough and were ready to take action. (This is where my face holds a blank stare, followed by an eyeroll.) The book says that McCarthy had had enough and he was going to call Trump and ask him to resign.

McCarthy decided he would seize the moment and take the opportunity to make it seem like MSM is lying on him by publicly sending out a statement saying it was false. ‘It comes as no surprise that the corporate media is obsessed with doing everything it can to further a liberal agenda,’ he continued. ‘This promotional book tour is no different.’ McCarthy said in his statement. Seems he was trying to score brownie points with the former guy. McCarthy also said: ‘If the reporters were interested in the truth why would they ask for comment after the book was printed?’. He thought that maybe they heard it from someone so he could deny it. Little did he know someone provided them with an audio tape from a Republican leader’s meeting via telephone. So, as you would suspect the news is having a field day playing the tape proving that he is a liar. Frankly, we knew that already so it’s not much of a news story to me.

What is news to me; after hearing a portion of the tape, the Vice Chair of the January 6th committee, Liz Cheney was on that phone call. It seemed only natural when Kevin McCarthy refused to provide his testimony for the January 6th committee this would have been a perfect time for Cheney to mention this phone call but instead, she kept quiet. I want to know why. Why is she still protecting Republicans that support a domestic terrorist ex-president? Also, how much more is out there that she knows about and has not shared with us?

I get it, Liz Cheney has become a hero because she was and is willing to stand up to Trump. We needed a Republican voice to show this was not about partisanship. Liz Cheney and Adam Kinzinger have been a breath of fresh air because they were willing to fight and call out Republicans.

I thank Liz and Adam for doing their jobs but what I want us to do is take a deeper look. Think about the time when Trump was being impeached. I remember when the news first hit about the phone call with Zelenskyy Republicans were upset. They were ready to take action. Then Trump being Trump demanded they all stay behind him. Made them all stick together. With zero Republican votes it seemed like the Democrats were just picking on the president. Which made the president that used his political power to bully President Zelenskyy seem like a victim. They all knew it was wrong. It’s why they hid from cameras because they didn’t want to be on record saying it was okay. Tucker Carlson wrote an op-ed that gave them an out to say ‘it was wrong, but not impeachable. All this information Liz has access to. Yet she hasn’t put it out there.

I will continue celebrating her on the January 6th committee, but I will not forget there is still loads of stuff she can tell us but she never will because she is protecting the Republican party. We should have heard this information from Cheney when McCarthy was asked to testify. It makes me wonder what else she is not sharing? Seems like she wants to ride this ride all the way to the presidency. I for one am not mad if that is her ambition but I am not fooled into thinking she is progressive in any way. She is fighting for her party. She can’t come clean because it may expose her. If that’s the case she is in the same boat as McCarthy and McConnell. She is protecting her party instead of telling America the whole truth. Why are you protecting them? Why won’t you stand up to them; ALL of them? Not just the president that became a thorn in your side and you had enough. I am we the people. I am not letting her off. I know that this is the lady that stood by Trump for four WHOLE years. She ran cover for him because she was in leadership. Because a “Cheney” didn’t speak up it made the things he did credible. Will we the people ever get answers? And I mean real answers. Not this game of just saying enough to tell on Trump. The RNC is behind a domestic terrorist. That should scare us. How is that protecting us from all enemies? It doesn’t matter that people want to, and voted for him. It doesn’t matter that these guys can’t be leaders and follow their oaths because they want to please the people. What it’s about is the oath that was taken to protect us from all enemies. That’s foreign and domestic. There were women who wanted to marry Ted Bundy. Just because people want something doesn’t mean it will be right for them.