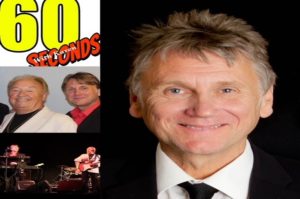 We all know the song “You never walk alone” which is the anthem of Liverpool Football Club and performed by Gerry and The Pacemakers. Gerry Marsden died in 2021 and Tony, who joined the band in 1996, took over and renamed the band Gerry’s Pacemakers. They are performing Live at The Sixties Gold Tour which will be all over Britain in October and November this year.

KB: How and When did you join Gerry and the Pacemakers as a keyboard player?

I joined Gerry in 1996 after knowing his old band since the 80’s. His keyboard player at that time decided to move on to a Pink Floyd tribute so the opportunity came around.

KB: Remembering they had all these huge hits back in the 60s like You never walk alone, Ferry across the Mersey, how intimidating was it to join such a great band? Or maybe it wasn’t?

Luckily, I had played many of the tunes prior to joining Gerry particularly Walk Alone so it wasn’t really that intimidating. Also of course I knew the guys in the band including Gerry from way back.

KB: Before joining you were a backup musician for many bands? Who did you play with?

I played for many artists mainly from the 60’s such as Brian Poole, Chris Farlow, PJ Proby, Steve Ellis, Dave Berry, and Wayne Fontana.

KB: The band in the 60s had the same manager as The Beatles and the same producer? Is that the only connection with The Beatles?

KB: You never walk alone is the Liverpool FC anthem: Have you performed it at Anfield? Liverpool supporters must love the band!

I have only played at the Anfield supporters club which was great but not the ground unfortunately.
However, Gerry and I did sing Walk Alone at a stadium in Norway that celebrated the Liverpool club. We flew over with the likes of Ian Rush and John Barnes and performed to a massive crowd.

KB: You perform at shows that do 60s music like Sixties Gold? Tell me a bit more about it.

It’s a theatre gig that has been running many years now. We used to do it a great deal with the Searchers and other artists until their retirement. There have been countless artistes appearing such as Herman Hermits, The Merseybeat’s, Marmalade, Spencer Davis, and The Fortunes. This year my band and I will be backing Gary Puckett as well as doing our own set.

KB: Gerry Marsden died in 2021? He retired in 2018 and you took over: How difficult is it to replace somebody like him?

Gerry always was and still is irreplaceable. However, Gerry’s manager and I wanted to keep his music alive as the songs were so strong. It’s been quite a task to find musicians that can keep the flag flying so to speak but I believe we have achieved that.

KB: Is the current line-up touring? Will there be anything new released?

We did a tour late last year when Covid became a little less serious and I used a great collaboration of musicians who have now moved on. However, I have formed a new band called Gerry’s Pacemakers who will be back to touring in October on the next 60’s Gold Tour. We have no plans to release anything at the present.

KB: Any current artists you would like to collaborate with? What is the biggest difference in music between then and now?

I am primarily a band musician, and it seems that there are many solo artistes out there which is fine, but I appreciate more the group line-up. I think the advent of Britpop in the 90’s was probably more my scene with Blur and Oasis and the like and the vibe seemed right back to the 60’s.

KB: How did you spend your time the last 2 years when the world was in lock down due to Covid and you couldn’t go anywhere?

The last 2 years I spent doing many on-line exams as fortunately I was accepted to join the panel for Trinity Rock and Pop in London back in 2018.