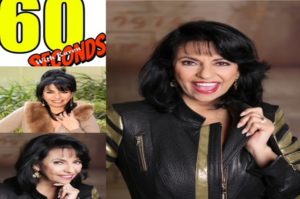 Laura Fygi is a Dutch Jazz singer who is one of the best in Europe. She used to be part of the girl’s band Centerfold. Her 1991 album “Introducing” is a gem where she covers many great classics. Her biography will be published by the end of this year. Check out her work as she is a gem.

KB: You were part of the girl’s band Centerfold in the 80s and had a big hit with Dictator: How did this happen and what was the song about?

The song was written by Peter van Asten, one of the producers of Centerfold at that time. It’s about a very dominant man, but the woman tames him.

KB: When you released your debut jazz album “Introducing” in 1991, everybody was surprised of your great voice: How did you feel about this reaction and about the great reception of the album?

The first CD was a confirmation for me that I was ready! It was my greatest wish. I didn’t care what others thought. I made it purely for myself. And of course, I was ‘over the moon’ that it was such a great success!

KB: How was it working with a legend like Toots Thielemans?

I have always been a huge fan of his music and having him record on my CD was an honor for me. Toots was a real gentleman. Always friendly and lovely to work with.

KB: You have worked with many great artists: Johnny Griffin, Michel Legrand: Is there anyone she would love to do a duet album with?

I always wanted to sing a duet with Al Jarreau. Unfortunately, that never happened. All I can do now is listen to all his CDs I have in my closet.

KB: You sing in many languages: English, Chinese, French, Portuguese, and Spanish: Will you ever record a jazz album in your own language Dutch?

I don’t think I ever will. For two reasons: It would never become an international CD and would therefore only be released in the Netherlands. And personally, I don’t find the Dutch language very melodic. I always say: “Dutch is not a language. It’s a throat disease!”

KB: The world was in lock-down for almost 2 years and you couldn’t do anything: How did you spend your time? Did you write new songs or record songs? Any hobbies?

I don’t write songs myself. I prefer to leave that to composers. But I really haven’t been sitting still for 2 years! Since we couldn’t perform in theaters, we did a lot of live stream concerts. I have also devoted my time to writing my book. A coffee table book with my biography and many, many hilarious stories. It will be out by the end of the year.