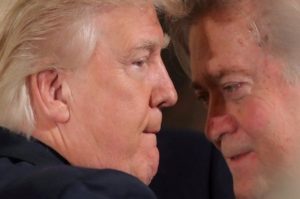 Steve Bannon was one of the guys behind getting Trump into office. He used his white supremacist connections to help Trump. They seemed like two peas in a pod until Steve Bannon gave an interview to a reporter that Trump did not like. I thought him and Trump were done but they pulled together to try and get Roy Moore elected in Alabama even though people were coming out of the woodwork to say that Moore was a pedophile. Moore lost with forty-eight percent of the vote. It will always baffle me that so many people voted for an accused pedophile because they did not want a Democrat in office. Trump was sure to let everyone know that Moore was not his pick for the Senate. He blamed the loss on Steve Bannon.

Bannon remained just outside of Trump’s orbit. He and some friends started a private company called We Build the Wall, which was supposed to be a way to help Trump build the wall with donations from his very faithful followers. It turned out it was a scheme to steal money from these faithful people. I thought for sure this was it. There was no way that Trump could forgive him for stealing money from the people that supported him and gave him money. I saw it like Bannon stole money directly from Trump. I was wrong on my assessment. Just before Trump left office, he pardoned Bannon for his crimes. He said he needed Bannon for his reelection.

That made me question what services could Bannon be providing that Trump could not live without? Aside from helping him plan a coup attempt that failed on January 6th, Bannon is not out there working for Trump’s campaign. Truth be told Trump, as of yet, has not declared that he will run again. He just hints at it so he can continue to get money from those faithful followers.
Then recently I saw something that made me say, “I get it!” I saw a clip of Bannon with Marine Le Pen. She is a politician that was running for president in France. She was someone who wanted to get rid of NATO because she supported Putin. All of sudden I no longer saw Trump as the boss who kept giving Bannon another chance. I saw him as a co-worker of Bannon and Putin is the boss. It makes more sense to me that Bannon, who knew how thin-skinned Trump was, could say anything negative about him, his kids, and also steal from his followers if he knew someone else was calling the shots.

Of course, I am no insider and I could be doing addition on a problem that requires subtraction. These are just thoughts on why Steve Bannon did not get the Sessions’ treatment. Why is it that no matter how much Sessions begged or pleaded; no matter how he tried to convince Trump he was on his side he was not let back in? Bannon on the other hand seemed to get away with things over and over again. I could be wrong but as I say, just thoughts. Maybe somewhere in the future we will find what the truth is.